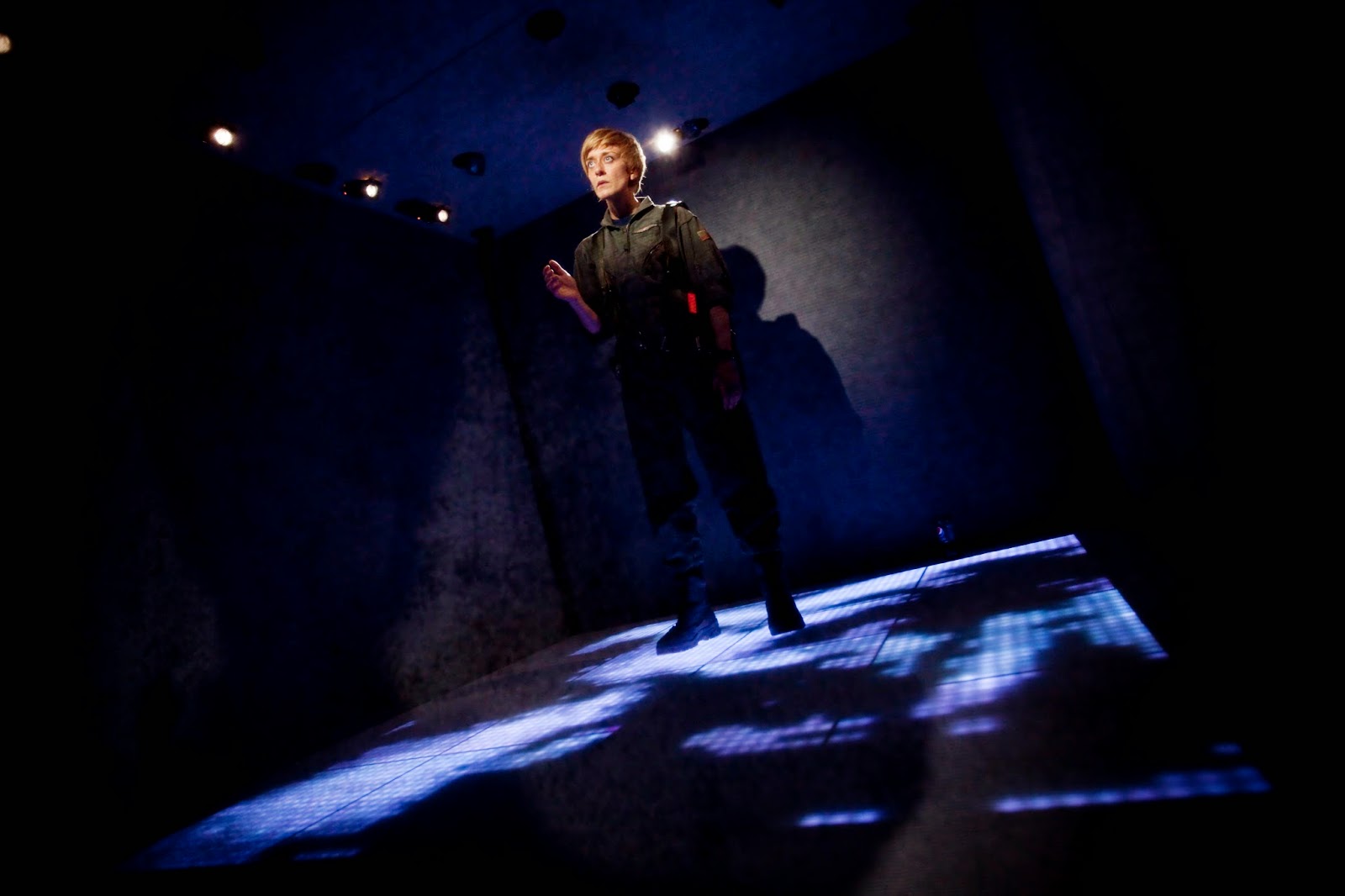 What happens when women go to war? George Brant’s new play, Grounded, is about a F-16 fighter pilot who is made to fly controlled drones after she gets married and has a daughter. It is a fiercely lyrical one-hander show about the conflicting strains placed on any working woman and the madness of a war fought via remote control. It is about what happens when a human is asked to do non-human things and is a thrilling and devastating ‘white-knuckle’ adventure.
The Gate Theatre has been re-jigged a little and the audience is placed around a semi-opaque cage, in which the pilot (Lucy Ellinson) performs. Oliver Townsend’s set is simple but flexible and jumps through a spectrum of moods in a matter of seconds. The floor of the ‘cage’ is bathed in projected lights and feels a little alien. Spotlights hang from the ceiling and bring comfort, warmth, excitement, terror. The pilot inside looks trapped or – if the walls are lit in such a way – free to escape at any moment.
The genius of Christopher Haydon’s production is that it stays remarkably still. This stillness comes to represent countless things; the entrapment a fighter pilot feels when forced to fly drones from the ground, the claustrophobic demands placed on a working mother and the crushing pressure of a life spent at war.
The stillness of this show also means it is down to Bryant’s script to keep the play moving – and Christ does he make it soar. This is the first time I’ve heard Bryant’s writing and there is an effortlessness to his imagery and a fluidity to his writing that is quite something. Massive moments are summed up with sparkling eloquence. We know the pilot is pregnant because her ‘belly is push, push, pushing against the desk’ and we know the pilot feels free when she flies because of this brilliant phrase: ‘I can feel the sky in me.’
The script dazzles but it might still feel like a virtuoso piece of writing, were it not for Ellinson’s stunning performance. The role of the macho female fighter pilot could’ve felt clichéd but Ellinson finds sympathy, humour and passion in the most unlikely of places.
Early on, when Ellinson’s pilot talks of her love for flying planes, she is as puffed up as a peacock on parade. But she is funny, too, and her straight forward take on the most romantic moments in life (‘Eric moves in – I say I do – and then the three of us.’) is endearing and honest. When she talks of her daughter she is invariably on her knees, her stature more gentle and her face open and light.
Gradually, we watch the pilot’s job – and the punishing twelve hour shifts played out in a lonely trailer in the Las Vegas desert – take over her body, mind and soul. Inch by inch, the grey screen the pilot watches every day wriggles deep inside her. The floor quivers with a grey that spreads, like oil, further and further across the stage. Things begin to slide; the pilot forgets to take off her uniform when she goes home, the walls grow more opaque and the lighting crowds on in. The war wriggles inside our pilot and she gradually loses her grip on reality, flying a plane she cannot feel, fighting a war she cannot see and transforming into a person she no longer recognises.