'Richard II' review or 'We will descend.' 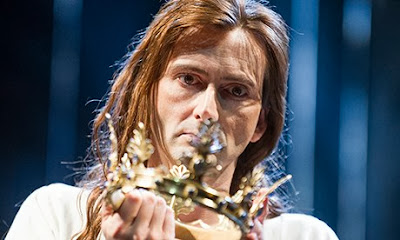 Richard II was only 10 years old when he ascended the throne and this early rise to power is stamped all over David Tennant’s brave, unlikeable and unforgettable, performance. This is a man who froze at the very moment he should have grown into something bigger and better than himself; a King who holds his sceptre like a doll, who is surrounded by old men much wiser than himself and who, in his darkest hour, calls out for bed-time stories.

Tennant’s Richard is also a man who, in his naiveté, trusts completely in the divine right of Kings. It is this faith in his divine power that first elevates and later destroys King Richard II. Gregory Doran’s enlightening production is framed with a glistening air of reverent divinity. Paul Englishby’s haunting choral music, performed by three crystalline sopranos (Charlotte Ashley, Helena Raeburn, Alex Saunders), practically knocks on heaven’s door. There is a distilled beauty to this music, which frames many of Richard’s more ridiculous outbursts, that stops the audience from laughing at him and whispers of that sanctity that Richard might not have earned but certainly owns.

That sparkling divinity also flickers in Stephen Brimson’s elegant set, which is as understated as Richard is showy. Sweeping bronze beaded curtains enshroud the stage in a shimmering ephemeral grace. Tim Mitchell’s lighting sequences throb with a similarly impressive yet unassuming beauty. Great sweeps of orange invoke the swell of a night moon and further subtle but gorgeous shifts in colour – from muted yellows, to glassy blues and smokey greys – gently reflect the great majesty that is contained in the shifting skies of Richard’s England.

There is a modest beauty to this classy production that forces us to take Richard seriously. This allows Tennant to push his interpretation as far as it will go and make his Richard as silly and petty and small as he dares. This is a Richard who cares more about his flowing locks then his followers; a Richard who wears glossy gowns that encase him in a protective sphere and keep him safely removed from human touch. This is a Richard who surrounds himself with followers only so they might applaud his pretty speeches. He is a King who is switched on when he is centre stage but whose eyes turn glassy whenever anyone else has the temerity to speak in his presence.

Tennant’s Richard isn’t as cruel as other interpretations, such as Kevin Spacey’s recently acidic take.  It isn’t that this Richard doesn’t care – only that he cannot feel.  With Gaunt on the verge of death, Richard gulps down his wine and urges his followers to join him in paying their last respects. He is astoundingly indifferent but not malicious. It is as if Richard’s emotional growth has been stunted and he reacts to everything as a ten year old boy might, interested and excited but never deeply moved.

Doran has cleverly accented the elder statesman in this play, in order to highlight the difference between their hard-earned emotional intelligence and Richard’s airy placidity. When Michael Pennington delivers Gaunt’s mighty ‘This England’ speech, it is thick with a lifetime’s understanding and feeling. Pennington summons up the dream of what England once was and the fiery nightmare of what he fears it will become. This is the kind of gritty, heart-pricking speech that can only come from one who has lived close to the ground and not above it; who has picked up and smelt England’s rich earth and fallen deeply in love with all it stands for.

The elder statesmen are connected to England and its people in a way that Tennant’s Richard cannot hope to be. Familial relationships, so formal and compromised in the royal family, play a strong role in this production. There is a fierce connection between Gaunt and his bullish son, Bollingbroke (Nigel Lindsay). It is this unbreakable tie – so much more tangible than that between Richard and his god – that provokes Bollingbroke’s return to England and succession to the throne. All around Richard, connections are being forged that he cannot replicate, rendering him increasingly isolated from his country and his people.

This isolation is brilliantly enhanced by Doran’s thoughtful aesthetics and Tennant’s stunningly complex performance. Richard’s throne is almost always elevated above the stage, emphasizing how much Richard’s role removes him from his subjects. As Richard’s Kingdom comes under greater threat, the throne struggles for dominance. In a final act of defiance, Richard’s throne descends from above, a golden glow pulsing around it. Richard and his throne climb up higher and higher, desperately clawing for the God that sets them above but apart from country and subjects.

That elevated removal is even there in the tone of Tennant’s voice, which is a good few pitches higher than normal. His speeches float above the rabble and his voice deepens only on a few exquisitely pointed occasions. It drops when Richard finally falls below his subjects, incarcerated in a prison that lies beneath the level of the stage. Richard’s voice also deepens in those rare moments of fear or betrayal which – in their human urgency – finally render Richard more man than majesty.