'let the right one in' review or 'Growing Pains' 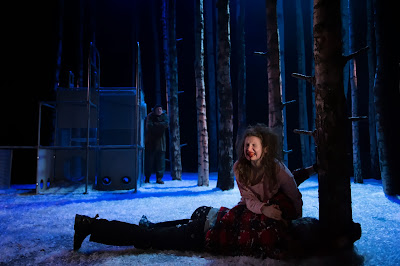 An acid attack as a symbol of love.  A girl whose skull cracks and bleeds, if she is not invited in. Countless victims hung up like pigs, their throats slit and their blood collected. This vampiric love story is a brutal piece of theatre; sharp, exhilaratingly physical, shocking and viciously romantic.

‘Let the right one in’ is already a cult phenomenon, thanks to John Ajvide Lindqvist’s 2004 novel and subsequent chilling movie. The movie was a cold, razor-edge experience that sliced right through one. The play was never going to be able to possess those same qualities. Theatre is just too physical and too immediate to be able to hold the audience at such an eerie distance. Instead, this is a deeply involving and visceral adaptation from writer Jack Thorne and director John Tiffany. The production is cruel and romantic, slicing and soaring; thick, muscular and overwhelming.

Christine Jones’ set has a nightmarish and hypnotic feel to it. We are deep in a Swedish forest, where regimented spindly trees climb up to impossible heights. A metal climbing frame stands in the woods, half fun and half torturous. Everything is blanketed in soft white snow, begging to be stained red.

Eli (Rebecca Benson, in a mature and beautifully balanced performance), the vampire girl who is central to our blood-red romance, hovers between reality and fantasy. She looks fairly normal but sounds weirdly airy. It is as if her voice has no heat in it. She has an elastic way of moving – shimmering up and scaling climbing frames and trees - that gives her a feral and magical quality. The shadow of horror dances about her but she is not horrific.

That same shadowy fear runs throughout John Tiffany’s expertly judged production. Full horror is rarely unleashed. Instead, the show is situated, painfully and thrillingly, in that clawing space between fear and terror. The scene changes are exceptionally fluid, with barely a breath, turn or exit between one scene and the next. Everything unfolds in the forest: beds, lockers, hospitals and swimming pools slide in and out of the trees. There is no space for us to relax, think or question.

Many of the scenes are soft, gentle, silly. Eli and her new pal Oskar (Martin Quinn) swipe sweets, play games and scamper through the forest. Some scenes even poke fun at the show’s genre. After Oskar and Eli have declared they are ‘going out’, Oskar spoons the chest inside which Eli sleeps. What confidence, to be able to play with the absurdity of this dark fantastical romance.

The surreal glaze to this show allows Tiffany to accent certain scenes with such invention. When Oskar tries to steel himself against the bullies (who, again, are all the more frightening for the mere promise of violence they hold in their clenched fists) he goes into the forest and practices his punching and bitching. A crowd of actors mimic Oskar’s movements. They are his growing strength and hidden demons. We watch Oskar find himself in that lonely forest that, among many things, represents the splendid and fearful isolation of youth.


There are some grand-standing horror moments but it is the indirect shocks that really affected me.  Sure, Eli’s skull leaks with blood and Oskar’s bullies are killed in a spectacular swimming pool massacre. But it is the little moments (those moments that are your world when you are young) that convert the horror in this story into something meaningful. As Eli and Oskar grow close, Oskar urges Eli to taste a sweet, something she has never done before. Against her impulses, Eli eats the sweet. Later, Eli wretches violently, alone in the forest. It is such a simple scene – but it howls with the pain we all experience on the cusp of adulthood, as we try to deny and grow into ourselves in one horribly lonely wrench.