'Gastronauts' review or 'Could I just get the chicken and chips?!' 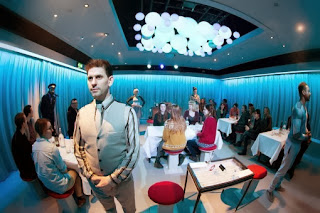 ‘Gastronauts’ certainly isn’t a dog’s dinner but I also didn’t go home raving about the Head Chef. There are some cracking courses in here, which will make you question your relationship with food and food production. The show is packed with spices and flavour; whacky tasting sessions take place in a new-age dining hall, as we are entertained by quirky songs, surreal fantasies and snappy satirical encounters. But I still had a hankering for a full-on main course by the time we got to desserts.

There’s a slightly chaotic air to Wils Wilson’s show, which put me on edge. The same flushed tension that permeates the 24 Hour Plays at The Old Vic lingered upstairs at The Royal Court; it was as if De Angelis and Muthy had been told to riff on the theme of food in an incredibly short amount of time. The team has just about pulled it off - but there is a precariousness about the show’s structure  and the actors’ performances, which suggests it was a close run thing.

This tension is bolstered by a doggedly quirky atmosphere which underpins – and threatens to undermine – the whole production. Everything that can be made weird is made even weirder. The whole experience is set amid a space age(ish) dining hall, with bulbous lights hanging from the ceilings and the actors dressed as shiny-looking flight attendants. Perhaps this setting is meant to lend the show an air of prophetic (sexy/shiny) doom – but this otherworldly framework only made the straight scenes feel even more out of place and the audience, a little out of sorts.

That forced quirkiness also impacts almost all the linking episodes, which hold the show together. There are weird explosions of sound and colour between some scenes, when a drink is spilled, lights flash, sirens blare and the cast stalks about the dining room, screaming ‘Spiiiiiiiill!’ They might as well have got the actors to holler out: ‘We have bugger all idea how to tie this piece together!!’

Despite this odd level of anxiety, which is really distracting, there are some fierce moments in here, which could only have come out of show with this much flare. The bizarre fantasy sequences are particularly effective and tap into Western society’s obsession with body image. A young girl greedily reads about a new diet in Grazia and speaks to her wafer-thin friend who is now trapped inside a strawberry. ‘You look so good!’, she screams at the strawberry. It is a bravely bonkers sequence, which emphasizes how ridiculously far these diet-fads can take us.

We’re also treated to a mind-bending taste session, in which our expectations about food are turned inside out. Something that looks savoury turns about to be sweet and we begin to realise just how dumbly and blindly we connect the appearance of food with its hidden content. With a frightening nod to the future, we’re invited to chomp down on insects. It’s much easier to imagine your future when you’re actually eating it.

That’s only the half of it. There are also a number of more conventional dining-related scenes, which examine the culpability of the food producers and the complicity of advertisers. Not to mention the scenes in which the connection between food and memory is teased open. On top of all of this, there is the occasional lull, during which it’d be rude not to make small-talk with our fellow diners. A bewildering, memorable, exhausting experience.