'Henry V' or 'Now can everyone die on the count of three!' 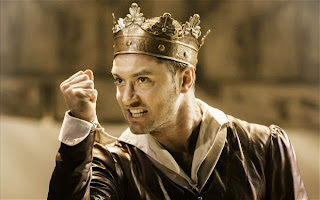 Well, that’s Michael Grandage’s first West End season done and dusted and let me tell you this: it was absolutely fine. There were plenty of celebrities, lots of lucid performances, some pretty sets and no surprises. The whole season has had a whiff of the head boy showcase about it. It’s all perfectly admirable and impressive – but it isn’t half galling too.

There’s even an air of head boy about Jude Law’s Henry V. Dressed in streamlined period costume, Law looks like he’s had a particularly adventurous rummage around Top Man. Law’s Henry V is the type of solid and confident chap you’d want to lead your football team. He is loyal and forthright and not afraid to get physical. This is a King who relishes confrontation but does not lose himself in it. That’s a fairly decent attribute for a King to have, with his England on the cusp of war with France.

Law’s Henry isn’t just strong; there are moments of great shade and colour to his performance. Law looks like he is really relishing the lushness and complexity of Shakespeare’s script, marvelling at Shakespeare’s tripping, swooping, teasing use of language. Law caresses the expansive vowels and triumphantly cuts down on the sharp consonants. He does a very decent job of carving out the script and all credit to Grandage for coaxing out such confident elocution.

But it does feel like it is the rich script and delivery that elevates Law’s performance rather than something that runs a little deeper. I’m not convinced Law’s characterisation is as sophisticated as his delivery – but it is still a skilful and convincing performance. The same can be said of Grandage’s production, which is solid indeed and just a little proud of itself.

There’s a vague weariness that clings to this show. It feels like Grandage is falling back on his greatest tricks so as to avoid offending this new, larger and richer, audience. Christopher Oram’s set encapsulates this elegant poise, which is just a whisker away from stagnancy. The stage is enclosed by huge planks of exquisitely aged wood. It looks like a giant shed; very pretty, vaguely ominous but ultimately a little bland.

Lots of the images - those big reveals in which the director and designer are meant to flex their muscles – are underwhelming. The same applies to Adam Cork (this is the man behind the inimitable London Road) and his sound design. It all feels a bit paint by numbers. On the eve before battle, the giant shed opens to reveal a sparkling night sky. Cork’s ‘wonder’ music, which is used at suitably reverential moments throughout the show, tinkles in the background. The soldiers shiver around little camp fires, which glow from beneath the stage. Each piece of the puzzle feels worn out.

The battle scenes, which is where the fire of this play burns, are flat. Propeller recently staged Henry V and their battles felt like one long extended chest-rattling war cry. These clashes were pumped full of so much testosterone, it was all I could do not to bash the person next to me. But Grandage’s battles are so tidy; so safe and so pretty! When Henry’s army prepare for battle, they stand in neatly arranged lines. And when the guns finally start firing, the fight unfolds with perfect symmetry. A gun goes off with each solider’s entrance onto stage.  This is battle as background support rather than foreground chaos.

There are little sparks and exceptions, which suggest how much more exciting this production might have been. Ashley Zhangazha is brilliant as the chorus boy, whose job it is to flit in and out of the show, pointing out its fictional qualities and losing himself inside the fantasy. Zhangazha, dressed in jeans and a t-shirt, makes light work of his performance. He plays around with his speeches, injecting them with fresh and immediate energy. He makes the play feel volatile and new.

The one time the show proper breaks free from its handsome restraints is in the final scene, when Law’s Henry attempts to woo Princess Katherine. Suddenly there is sparkle and spontaneity to Law’s performance. A little of the man, fallible and unpredictable, is finally allowed to wriggle into the show. The head boy is vanquished, the school rebel takes over and the show is transformed from a fine monument into a vulnerable but lively production.