'Phoenix' review or 'Where's the inside track?' 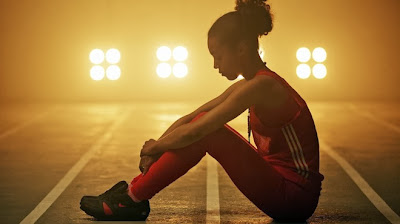 Latitia’s mum thinks she is the devil. Her legs are going funny, her boyfriend is a bully and her friends are losing faith. All she really wants to do is run – but Latitia has just got out of care and nothing is that simple. What would we know anyway? As Latitia says, ‘Mine and your world run separate’.
The Big House Theatre Company uses theatre to help prepare people for life after care, by casting its shows with performers who have been through the social system. ‘Phoenix’, written by Andy Day, tells some of their stories. Director Maggie Norris’s powerful promenade show invades the audience’s space to brutal effect. Fist fights and fantasies brush up against you and rattle your bones.
Latitia’s is the central story and unfolds in a smoky space with just a hint of a set. Kate Unwin’s design is filled with temporary spaces; a sofa squidged in a corner, a cluster of tyres and a worn out running track. Everything looks hazy, as if it could vanish in an instant.
Jasmine Jobson plays Latitia and her searing performance sets the show alight. When Jobson’s Latitia is at the running track, her eyes are steady and her energy contained. But when Latitia lets rip, a lifetime’s emotion is released.
Some scenes might clank a little but this show boils with raw passion. Norris has marshalled some frightening fantasy sequences, which bristle with fears unspoken. The actors crawl, stalk, scream and writhe up the running track. Latitia, paralysed, struggles to find her feet and outrun her fears for good.