'Drawing the Line' review or 'Colouring in between the lines.' 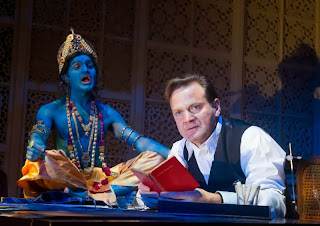 A finely suited chap grabs a crayon, draws a line through a map of India and cries out: ‘How many did I just kill?’ This man is Cyril Radcliffe, a British judge who, in 1947, was given just 6 weeks to divide India into two new sovereign dominions. The result, explored with rigour and flair by Howard Brenton, is a farce which gradually curdles into a grotesque and disturbing drama.

This is no easy-going Christmas show - yet it does feel a little panto at first. John Mackay plays Prime Minister Clement Atlee as a weasel in a suit and Tom Beard’s Cyril Radcliffe looks like a head prefect, let out of school a few years too soon. When Radcliffe tells his wife he is going to India, she squeals gleefully at the thought of him staying with the practically-royal Mountbattens.

In India, Lord Mounbatten (Andrew Havill) looks like a Spitting Image Prince Charles, stiff and blustering and cruel. The Leader of the Congress Party (Silas Carson), fighting for an independent India, is a politician of a thousand faces and, in his hypocrisy, quite convincing. His opposition – Muslim League Leader Jinnah (Paul Bazely) – cackles like a James Bond villain and Gandhi (Tanveer Ganhi) sounds like a Bikram yoga instructor who has lost his way.

It all feels pretty crude and is only made worse by a number of lumbering dramatic devices from Brenton. This is surprise, coming from the writer who brought us the beautifully structured Charles I drama, ’55 Days’. ‘Drawing the Line’ isn't as seamless. The characters frequently address the audience directly and a number of clunky spiritual cameos fall flat. At one point, Mountbatten even screeches into the audience: ‘For God’s sake draw the line!’

But as the severity of the situation kicks in, Howard Davies' production darkens and takes hold. As Radcliffe and his young advisors work late into the night, desperately poring over a map that refuses to neatly divide, Radcliffe stutters out: ‘All I can suggest is a tentative scribble’. The audience gasps, amused and shocked, as the devastating absurdity of this lethal endeavour hits home.