'Three Sat Under a Banyan Tree' review or 'Try to stick with the story.' 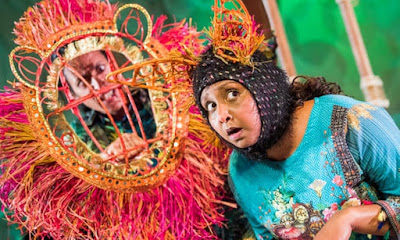 The Panchatantra might have been conceived with children’s theatre in mind. It’s a series of ancient, enduring Indian fables, set in a mysterious forest populated by brave mongooses, cunning crows and a surprisingly wise tiger. There are lessons to be learned from these stories, but they’re also great fun to read: lively, challenging and shot through with danger. This is the first time the fables have been adapted for the UK stage but it feels like a missed opportunity: the result is muddled, restrained and a touch too reverential.
My eight-year-old goddaughter, Blue, visibly struggles to engage with this co-production for the over-sevens by Polka theatre and Tara Arts. There are a few sparky moments – particularly involving designer Claudia Mayer’s ornate animal masks and tantalising flashes of traditional Indian dancing. There is also stellar movement work from Rose-Marie Christian as an anxious crow, and a powerful performance from Medhavi Patel as a fiercely protective mother. But in general, the acting is muted and Jatinder Verma’s uneven production is much too inward-looking. The attempts at audience interaction feel like an afterthought rather than an innate part of the production.
Shamser Sinha’s adaptation is frustratingly fractured. A fussy framing device involves three siblings who are lost in the forest, with only the Panchatantra tales for guidance. Blue gets confused and starts to whisper a lot of questions. In particular: why is the children’s book represented by two large sticks? It’s never a good sign when the symbolism starts to obscure the story.
We are presented with three of the most popular fables: The Crow, The Mongoose and The Tiger. The titles alone are enough to set the imagination flying, but the stories don’t take off. The characters feel diluted, there’s little rhythm to the storytelling and the dialogue is dragged down by one too many stiff phrases. Lines such as “Fate conspired to present a chance” are never going to set the children’s hearts racing.
The Mongoose fable is easily the most absorbing. It’s a genuinely harrowing story about a mongoose who protects an infant from a deadly snake, only to be mistakenly killed by the baby’s mother. The white forest silhouette set is flooded with colour and Blue’s eyes light up. But just as the story is turning brilliantly weird, and the mongoose opens his mouth to reveal a shooting star, snake or possibly a spirit, the interval arrives. The spell is broken and when the snake returns, re-imagined as a piece of rope, Blue refuses to believe the fantasy.