'A Guide for the Homesick' or 'Haven't we been here before?'

A Guide for the Homesick, Ken Urban
Trafalgar Studios, 18th October 2018
Written for Time Out 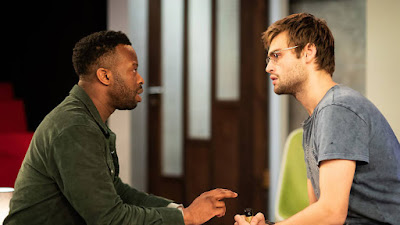 Ken Urban has compared his plays to musical scores. If so, then this American writer’s latest score hasn’t been conducted brilliantly. It’s such a shame: director Jonathan O’Boyle staged a fluid and moving production of Urban’s ‘Sense of an Ending’. But the rhythm and weighting of this jittery two-hander is all off.
‘A Guide for the Homesick’ was originally a commission from a New York company devoted to special justice, and one can sense the spec weighing down on this production. Two strangers meet in a hotel in Amsterdam and reveal their darkest secrets, which just happen to share common themes such as identity, loneliness and loss. The set up feels contrived, and Urban gradually runs out of feasible reasons for these two to stay cooped inside a crappy hotel room (a convincingly bland job from designer Jason Denvir). The flurry of false exits begins to grate.
Douglas Booth has a nervous charisma about him as a teenager turned man, en route home following a harrowing stint as an aid worker in Uganda. Booth flirts and flutters around Clifford Samuel’s Teddy, a Harlem-born Ugandan homosexual who positively glows with hurt and deeply buried passions. Both have lost someone close to them and both are looking for the solace they could not provide their now-missing friends.
Samuel is particularly good as a man turned exile in his own country because of his homosexuality. But the script and direction works against the actors. The action switches relentlessly between Jeremy’s time in Uganda and Teddy’s disastrous holiday in Amsterdam. Phone calls, hand gestures, lighting states or memorable phrases bleed between the scenes. But these linking techniques feel heavy-handed and increasingly hammy. As the stories are carefully tied up, Booth is finally allowed to leave the hotel room – only to be hit by a tidy row of rain. What a wash out.