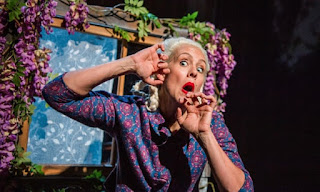 Who’s up for an offbeat musical about postnatal depression? Wait, don’t go! Bryony Kimmings’ solo performance is acutely painful in places but it’s actually an easy sell: this is an extraordinary piece of theatre. I’m a Phoenix, Bitch shows Kimmings is an artist of exceptional integrity, compassion, imagination and guts. The production is part of BAC’s Phoenix season, reopening the theatre’s grand hall after a devastating fire in 2015. As such it’s a double inspiration and a testimony both to human resilience and the healing properties of art.
You could describe Phoenix – co-directed by Kimmings and Kirsty Housley – as a subversive feminist musical, and it has elements of a pop video, horror movie, art installation and therapy session. Like all of Kimmings’ devised works, it’s deeply personal, this time chronicling the moment in 2015 when she broke up with her boyfriend, lost her mind and very nearly lost her baby.
The show is tied together by a series of brilliant songs, composed with heart and wit by Tom Parkinson and ingeniously staged. Kimmings performs them at a number of mini-sets scattered across the stage (designed with exquisite attention to detail by David Curtis-Ring), which are recorded by a video camera and then projected on a giant scale. We’re presented with big Kimmings and little Kimmings at once – two sides of the same performer – as she dons wacky wigs and pokes fun at herself and her somewhat anti-feminist tendencies. A particular highlight sees a boggle-eyed Bryony sing with a quivering manic energy, as she fixes her make-up, fries bacon and locates a rusty manacle to stop her boyfriend fleeing.
As the show begins to warp and darken, Kimmings performs a horror-movie shtick, a manic gym session and a crazed mime as she struggles to control her narrative while the world and her doubts (often represented by a deep-voiced man) push back against her. A series of breathtaking projections from Will Duke pull us in as we watch her stalk through a looming wood, as the ground collapses beneath her feet. It’s a choking and exhilarating ride as Kimmings learns to trust in herself – and inspires us to do the same.