'Sundowning' review or 'Tell me about when you were young.' 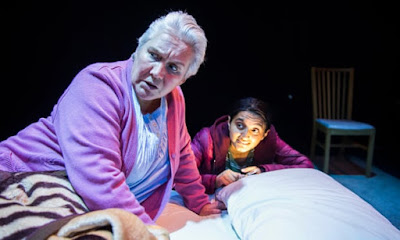 Dementia is a heartbreaker. It’s also a nightmare to stage: repetitive, meandering and often deeply boring. But dementia will touch so many of us, and it’s important to create plays that explore this condition with unflinching compassion. Sundowning does just that. It’s wildly uneven but it is also heartfelt and honest, and Hazel Maycock is devastating as dementia-sufferer Betty.
Nessah Muthy’s own grandmother had dementia, and you can feel that first-hand experience and deeply felt pain in her writing. Ironically, it’s the dementia that makes the most sense in Helena Bell’s shaky production. There’s a laboured subplot about an estranged granddaughter, Alyssa, just released from prison, and her put-upon aunt Teresa, but these scenes feel brittle and unconvincing. It’s the encounters between Alyssa (a sparky Aasiya Shah) and grandma Betty that linger and burn; they’re relatively free of plot but crammed with feeling and insight.
Muthy nails the way sensory experiences can burst through the dementia haze. Against the backdrop of Daniel Denton’s melting projections, as if the weather itself is sliding away, Betty and Alyssa dance and sing together. They enjoy the smell of moisturiser, the feel of a hug or the taste of a wine gum – all those pure pleasures that dementia cannot erode.
The play hints at the violence the condition can provoke in others (Betty’s body is covered in bruises), and the powerful hold the past has over the present (she talks obsessively with her dead husband). Muthy also explores one of dementia’s stranger side-effects: an incredibly high sex-drive. In one truthful but hard-to-believe moment, Betty reaches inside her nightie and masturbates in front of her granddaughter. The temptation is to look away. The strength of this play is that we cannot.