'A Kettle of Fish' or 'Can we land this flight?'

'A Kettle of Fish', Brad Birch
The Yard Theatre, 27th September 2018
Written for Time Out 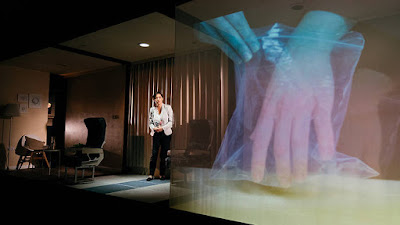 This should’ve been the dream team. Brad Birch has a knack for writing eerily dislodging plays, and director Caitlin McLeod gravitates towards writing with a subtle but spikey sense of unreality. They might’ve worked brilliantly together but ‘A Kettle of Fish’ is frustrating stuff. It’s set on an aeroplane and is about the dislodging impact of grief. Despite the use of headphones, a shape-shifting set and abstract projections, the play fails to lift off.

This is a one-woman-play and Wendy Kweh puts in an impressive shift as anxious data analyst Lisa. Kweh delivers an extended monologue directly to the audience, which we hear through our headphones. She tells us about the argument she had this morning, at home with her dad and then heads to the airport for a work trip. Shortly after take-off Lisa learns of a devastating fire at home, and her hold on reality begins to slide.

It’s a juicy premise but Birch’s writing is swamped by endless similes and metaphors, as if he’s reluctant to really get stuck in. Lisa tells us about her day in exacting detail but it’s indulgent writing: observation for observation’s sake. The audience headphones are probably meant to augment Lisa’s feelings of isolation and dislocation – ditto to Max Pappenheim’s echoing sound effects, Tegid Cartwright’s expressionistic projections and Ingrid Hu’s symbolic set, complete with gaping holes into which Lisa might fall. But everything feels a bit try-hard – designed to amp up emotions that simply aren’t there.

Just occasionally the theatrical elements fuse and thrill. After hearing about the fire, Lisa suffers a panic attack mid-flight. The lights flash red and a hooded figure appears in the shadows as Lisa, flying high above the city, fails to escape her sorrow.