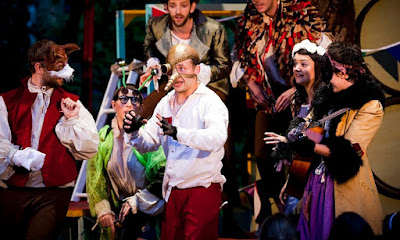 Forget the golden-hued, heart-warming Disney version of Pinocchio. Iris Theatre’s promenade production is based on Carlo Collodi’s original story, which is dark, knotty and rather grown-up. The show begins with the funeral of Gepetto’s child, as a small coffin is paraded through St Paul’s church courtyard. This Pinocchio isn’t child’s play but, by the end, I had kids leaning over my shoulder to get a closer look and happily heckling from every corner.
I’ve brought 8-year-old Queiva to watch this outdoor show and, at first, she’s reluctant to get involved. We stand nervously at the back as Daniel Winde’s sumptuous production begins. Qeiva seems unconvinced by theatre outdoors but it isn’t long before she’s hunched down in the starting position, ready to scamper to the next scene and bag herself a prime spot.
Daniel Winde’s creative team, including set-designer Amber Scarlett, costume-designer Denise Andersson and puppet-maker Alicia Britt, have created a bang-out beautiful production. The puppets are unusual, complex and mesmerising and appear in every shape and size imaginable. Pinocchio (Nick Pack) is reimagined as a strange and spooky creature; half man and half machine. He looks like a mini Terminator, with a brass mask covering half his face and a shiny telescope for a nose.
The show has a rustic and bronzed aesthetic – think Martin Scorsese’s Hugo in the great outdoors. There are evil foxes and lupine police, brought to life with gorgeous little half-masks. A snail is represented by a dinky little socket puppet and later transformed into a human-sized slithery concoction. Jiminy Cricket appears as a bronze puppet with gleaming emerald eyes and when the donkeys appear – with heavy hooves and fluffy ears – the children aren’t sure whether to flinch or pet them.
The show is exquisitely designed but also bloody good fun. At one point, Pinocchio gets into a wacky fight with Jonathan Mulquin’s foppish fox. The fight is played out in slo-mo, with booming sound effects. Queiva turns to me with sparkling eyes: “Did he just hit him in the you-know-what?!” In another scene, Nick Howard-Brown’s schoolmaster struggles to control his class. I doubt Queiva has ever been so happy to be roundly told off at school.
There are sea storms and swirls of clouds; a bizarre sequence in the Land of Fun and a scene that unfolds entirely inside a leviathan’s stomach (Qeiva lets slip a cry of “Cool!”). Of course, I could pick holes: Winde’s script is too convoluted and too long (the kids will have to stay up long past their bedtimes) and Candida Caldicot’s music is gentle and witty but slows things down. But all this matters little. I have rarely seen such a captivated crowd of kids. In one scene, Pinocchio cries out: “Is this is a dream?” and one entranced child cries out, ‘No!’ If this is a dream, we don’t want to wake up.