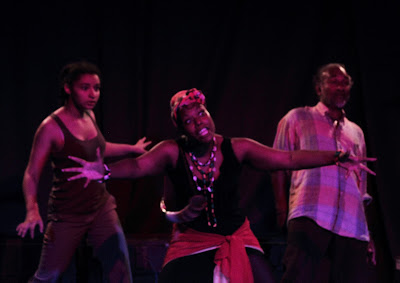 The Black Spartacus of the title is Toussaint L’Ouverture, also known as the Black Napoleon. As you might’ve guessed, he was quite the leader. At the end of the 18th century, L’Ouverture led a slave revolt and helped transform the West Indian island of Saint Domingue into the world’s first black republic – Haiti. It is one heck of a story, which – unfortunately – is only released in confusing little bursts in Anthony Maddalena’s well-researched but raggedy play.

‘Black Spartacus’ started out as a radio play and this genesis tells in Joseph Charles’s static and wordy production. There are heaps of battles in this story – Toussaint and his troops overthrew their French masters and beat off the British – but we barely see a jab or a scratch. Most of the gory stuff happens off stage and all we’re left with are bloody T-shirts and endless chatter.

Jim Findley makes for a charming and twinkly Toussaint, although he’s perhaps a tad too gentle. Ben Onwukwe, as Toussaint’s second-in-command, is robust but his delivery is a little one-note. That goes for a lot of the actors, who shout through great sections of the script – even the gentle stuff. The pressure points of Charles’s production are all over the place and every scene feels very important yet, weirdly, strangely irrelevant, too.

There are some great voodoo ceremonies, which are underpinned by ferocious drumming from musician Zozo. Suddenly – finally – the stage fills with lively and rebellious spirits, determined to make themselves known.