'Our House' review or 'In the miiiiiiddle of the street!' 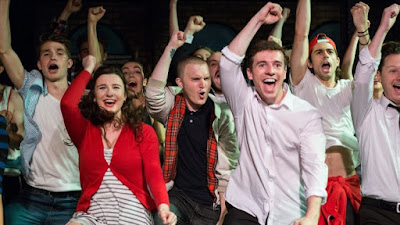 ‘Our House’ is like being sixteen again. Hormones are rampant, emotions are rocketing, energy levels are endless – and nothing makes a lot of sense. Underpinned by a cracking soundtrack from ska band Madness, ‘Our House’ won the Olivier award for best new musical in 2003. It won’t break your heart, but it’s still a head-banging and fist-pumping delight.

Steven France heads up a ridiculously energetic ensemble cast, of which director Michael Burgen should be heartily proud. France plays Joe Casey who, on his sixteenth birthday, finds himself at a crossroads. Will he choose the right path? Tim Firth’s musical then splits in two, as ‘good’ Joe and ‘bad’ Joe make their way through life, accompanied by the spirit of Joe’s slightly dodgy – and now dead – dad (Dominic Brewer).

The plot, of course, is total codswallop, but that doesn’t matter a jot. Burgen’s production is effectively a two-hour party, buoyed by Richard Baker’s slick musical direction and played out against designer Eleanor Wdowksi’s cheeky and colourful set. The cast don’t stop smiling or stamping their feet for a second; they look like they’ve been released from detention and are bloody determined to make the most of their freedom.

‘Baggy Trousers’ pulses with a kind of manic joy and the actors chuck their limbs about as if desperate to get rid of them. ‘Our House’ and ‘Driving in My Car’ rumble with good humour and infectiously high spirits. The cast has clearly been brilliantly drilled, but there’s also a wonderful freedom to William Whelton’s choreography: he allows his cast to simply enjoy being young, loose-limbed and a little bit crackers. By the end, I wanted to leap out of my seat and high-five the lot of ’em.