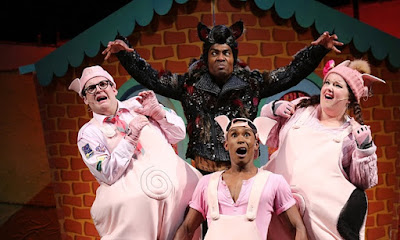 This is the first family show I’ve been to with a bona fide red carpet. The paps are here to snap some reality TV stars who I don’t recognise and the children I’m with – four-year-old Rufus and three-year-old Martha – couldn’t care less about. It’s an odd way to kick off this musical version of Three Little Pigs and sets the tone for a show that seems more concerned with impressing the adults than dazzling the kids.
The big draw is Simon Webbe, who sings with the boyband Blue. He plays the Big Bad Wolf and, wearing a leather jacket with a smattering of feathers, looks like Elvis Presley in fancy dress. The songs are written by established composer George Stiles and lyricist Anthony Drewe, whose shows include Betty Blue Eyes and Honk!. Webbe has a lovely relaxed voice and is gifted some swoony, sinister numbers. But he never looks comfortable on stage and, crucially, isn’t the least bit frightening. Martha barely flinches when the wolf hisses at the kids and is much more scared of the swooping spotlights.
Stiles certainly knows how to whip up a catchy number and This Little House brings the – ahem – house down. Whenever Mother Pig, Alison Jiear, opens her mouth and sings, the stage feels a much brighter and sparklier space. The three little piglets, dressed in huge, pink fat suits, sizzle nicely during the musical numbers. But all the acting is a tad overdone.
Jason Denvir’s set comes into its own in the final act, when the three pigs’ houses are revealed. They’re rather sumptuous creations; one heaves with hay, another is made up of spindly sticks and the pièce de résistance, the brick house, comes complete with a smoking fireplace. The audience bursts into spontaneous applause and it’s one of the few times the children seem genuinely involved.
Anthony Drewe’s book is aimed at the children and adults alike but with lines like, “I’m sweating like a pig”, it feels undercooked. Ewan Jones’s choreography is slick but slightly old-school; there’s plenty of jazz hands, head whips and even some running on the spot. It’s a bit pig-by-numbers. At the end of the show, it’s hard to get a response out of my young companions, who eventually offer a tentative thumbs up. I reckon they’re being polite.