'Bakkhai' review or 'When are we going to come to our senses?' 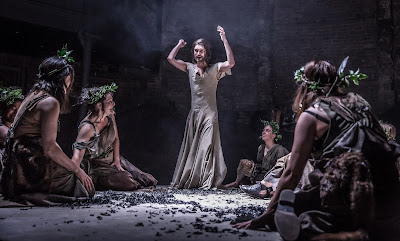 I wasn’t very well when I went to see Anne Carson’s new version of Euripides’ ‘Bakkhai’ but perhaps that isn’t a bad thing. You’ll probably feel pretty ill by the time you leave. There’s something weirdly off key (quite literally when it comes to the chorus) about James Macdonald’s eerie production. You won’t always like it. Sometimes you might even hate it. But it’ll do funny things to your body and mind and leave you unsure of your senses, yourself and the show.

Ben Whishaw is the shape-shifting and head-spinning centre of James Macdonald’s unforgiving and unsettling production. He is our Dionysus for the evening, a god in the form of a man who has come to wreak havoc on ruler Pentheus and the citizens of Thebes and punish them for questioning his godly heritage. He is here to teach these sceptics a lesson; a lesson that’ll be left engrained on their hearts and slashed right through their skin.

Has there ever been a more mercurial and tantalisingly unknowable actor than Whishaw? His Dionysus spends a lot of time swishing about in a flowing dress and delicately tossing his long locks. He is delicate and effeminate and, when he laughs, it sounds like wine is trickling from his chops. He charms and dazzles the 10-strong female chorus but always keeps his distance. He also has a strange twitch – a flicking and snapping of his arms – as if the remnants of a spell he has cast keep forcing their way out of him. These violent jolts become more frequent as the play progresses and Dionysus’ impact takes hold. Whishaw’s physical presence grows stronger and harsher until we begin to sense a bull of awesome strength hiding just beneath the skin, ready to burst out and rip right through us all. He is frightening to watch, hideously charming but with a glint of danger hovering at the edge of that wide and watery smile.

Macdonald’s show feels dangerous and alert whenever Whishaw is on stage. Bertie Carvel, who first plays the arrogant and unwieldly leader Pentheus – and goes on to play Pentheus’ mother Agave, entranced by Dionysus’ spell – is similarly intoxicating. When Pentheus first appears on Anthony McDonald’s peat-lined stage he is strong and suited, with a dash of silver on his nose. This promise of mischief will later spread, until Carvel’s Agave is skipping and storming around the stage, silver hair swirling and feet stamping so hard, it’s as if they’re trying to kill the very ground beneath them.

Woven in between these electrifying encounters are a number of sequences with the female chorus, which grate like hell. It is in these scenes that Anne Carson’s script feels most self-conscious and is the least effective. There’s a joltiness about her spikey text – part mythical and part colloquial - that wears the words out in these choric interludes, which are sung throughout. The script is a little too disjointed, too jarring, too try-hard. Combined with Orlando Gough’s dissonant composition, the words are worn down to nothing. Dischord and disharmony bash up against each other, over and over again, until we’re left with nothing to hold onto.

These chorus sections are probably meant to be another corrupting presence in a highly subversive production – but it’s all a bit much. The scenes push right though the point of unsettling and become unreachable and even a little banal. It’s such a shame and means the production keeps snapping and failing and losing us in all the wrong places. We’re frequently given space to breathe when we should be being suffocated.

But there’s enough horrible and ugly energy instilled in this production to overcome these dodgy choric encounters. The fact that one of the final scenes - in which Carvel enters in a swirling dress, brandishing a human head impaled on a stick – does not raise nervous titters but instead only blank and silent horror is really quite something. Macdonald and his company have gone for it here and they haven’t been afraid to disgust us – and that is something pretty beautiful indeed.