'The House That Will Not Stand' review or 'Who exactly is going to blow this house down?'

The House That Will Not Stand, Marcus Gardley
Tricycle Theatre, 15th October 2014
Written for Time Out 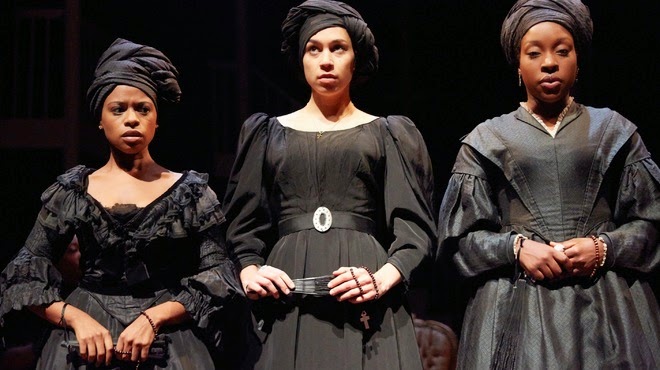 Three pretty ladies sit in a row and, commanded by their mother, delicately flutter their fans. Marcus Gardley’s new play, ‘The House That Will Not Stand’, is set in New Orleans in 1836 but the first act feels like a bizarre restoration comedy. There are light chuckles aplenty and it isn’t until the much darker second half that the fierce spirituality of Gardley’s play is released.

The play – receiving its UK premiere – is set at a time of great political flux. New Orleans has switched from French to ‘Yankee’ rule and the relative freedom once afforded to people of colour has been rescinded. Black mother and mistress, Beartrice Albans, has been swept up in this political tidal change. Her white ‘master’ has just died, and the promise of a large inheritance for Beartrice and her coloured daughters is fading fast.

The first act is directed with careful formality by Indhu Rubasingham and creaks a little. Tom Piper’s set, with its weaving staircase and swooping black drapes, adds some welcome drama. Otherwise, it’s all a bit predictable. The daughters squabble, Beatrice banters with a bitchy neighbour and the savvy servant rolls her eyes. This might be a fresh context but we’ve seen it all before.

Thankfully, the second act brings séances and smoke; singing and sensuality; fierce showdowns and shocking twists. As Beartrice’s daughters begin to rebel, the show takes hold of its audience. Martina Laird is ferociously commanding as embattled matriarch Beartrice, Tanya Moodie’s servant resonates dignity and Ronke Adekoluejo, as the youngest daughter, nakedly yearns to be loved. As they dance together, thrusting their bodies in a way that feels both empowering and overpowered, it is as if they are dancing for their lives.