'Our Town' review or 'We're going to paint the town What?' 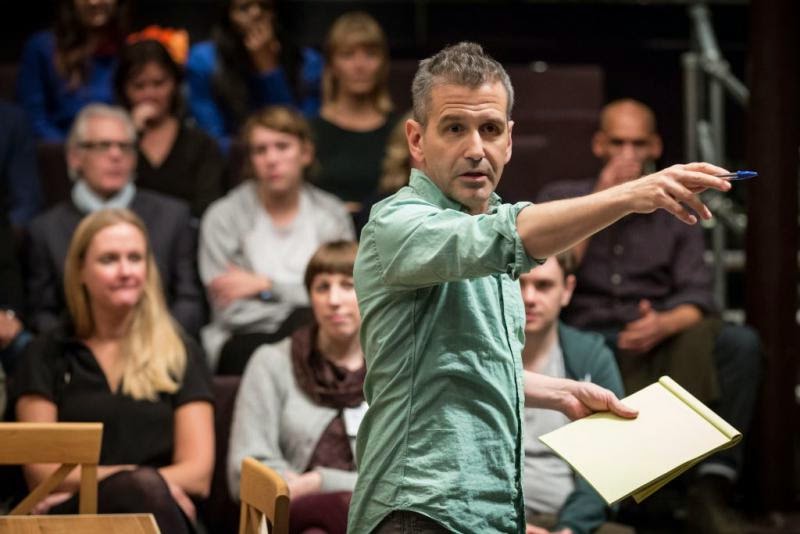 David Cromer’s version of ‘Our Town’, Thornton Wilder's revered American classic (which we have rather sniffed at over here), is supposedly pretty radical according to the Almeida’s artistic director Rupert Goold. I’m not convinced. The big twist is that the narrator of the tale, who guides us through the everyday moments of a small town in New Hampshire, is played by the director Cromer. The text seems fairly similar to the original, the setting is still 1901 onwards but the costumes are contemporary and the accents are global. The idea, presumably, is to emphasize the universality of the lives represented in ‘Our Town’ – and also amp up the meta-theatrical elements of this piece. It is partly successful – but it isn’t all that revelatory and some of the heartfelt magic of this craftily romantic play is lost.

Cromer’s take on ‘Our Town’ makes me think about Wilder's play – rather than feel it - and is a particularly stylised version of Wilder’s softly philosophical piece. I can understand why one would take such a cerebral approach with this piece since there are many elements that cry out for a rather intellectual and self-conscious directorial method. But this is still a very sentimental play at heart; a work that emphasizes the importance of the little moments, the little towns and the little people, in the grand old meaning of life. You have to allow some romance into the play – otherwise it withers.

The last version I saw of ‘Our Town’ accented the soft-tinged lyricism of Wilder’s narrative, which is read out loud by the stage manager, or in this case the director, of the show. Wilder also wrote ‘The Bridge of San Luis Rey’ and his narration has a tender profundity to it that can prove exceptionally moving. If you deliver Wilder’s narrative in the right way – ‘The sky is beginning to show some streaks of light over in the East there, behind our mount’in’ – it can softly, warmly spread right through you.

But in this production, Cromer re-imagines the narrator as a rather hard-skinned and jaded American director. He talks in a clipped tone and there is a latent cynicism and weariness to everything that he says. It is a clever take in some ways – and it does tap into Wilder's efforts to puncture the illusion of everyday reality and remind us not to get so lost in the small details of our lives that we forget to really look appreciate our lives. So I do understand the reasoning behind Cromer’s mode of delivery – but I don't really like it and I think that something crucial (heart) is lost in the process.

This cynical approach does make the opening scenes a little more exciting, surprising and involving. The seating at the Almeida has been re-jigged and some of the audience sits on benches that reach into the ‘set’, or the few chairs, tables and props that make up the purposefully minimal scenery. We are seated 'inside' the show: the actors walk among us, make direct eye contact with us and even give us questions to read out loud. We are sewn into the fabric of the show in a way that I think Wilder would appreciate and that chimes with the heightened awareness that his play is trying to bring about.

The lights are kept up throughout the show and we are never allowed to forget ourselves, our bodies – or the people around us. This is a clever touch. It reminds us to keep check of those things that we normally take for granted. That really is what Our Town is all about – a thoughtful look at the little moments and the little decisions in our lives, the supposedly unimportant stuff that in reality adds up to all the ‘big’ or ‘profound’ moments in our lives.

All of this, then, makes sense. But gradually ‘Our Town’ morphs from a modestly reflective piece into something that is really quite sumptuous and emotional. Gradually, the people whose lives we have looked at from unexpected angles become the main characters, the protagonists with big and important trajectories that we have now invested in. What initially feels like a very small and modest piece, slowly and quietly grows into something profound and moving – and it is this final turn towards emotion and meaning that Cromer's show lacks.

The scenes that should move actually feel a bit schmaltzy – even embarrassing – in Cromer’s production.  There is an extended scene in a graveyard, which involves the ghosts of many characters we have slowly connected with. It is a scene that has the potential to wrench the heart in two. But the trouble is there isn’t much heart in this production – so there isn’t an awful lot to ‘wrench’ when the moment arises. The relationship between Anna Francolini’s wise Mrs Gibbs and Rhashan Stone’s cool Mr Gibbs doesn’t really add up to all that much. I’m not saying that the two share a great romance or that Thornton suggests real passion between them but a connection is needed all the same. The relationship between the young Emily (Laura Elsworthy) and the gorgeously naive George (David Walmsley) has something cold about it too. Again, Wilder wasn’t setting out to depict a rose-tinted romance – quite the opposite – but there is a reservation about all the relationships in this production that saps away the potential pathos.

When Emily goes back in time, in a final and desperate bid to live one moment of her life again, the scene feels downright cheesy – despite a brilliant touch from set designer Stephen Dobay, who suddenly replaces the stark minimalism of the show’s set with a gloriously three-dimensional, smoke and snow-filled setting. The stage positively throbs with all the little details in life we take for granted; the sizzling from the cooker, steam rising from the hot water and the sun slowly rising beyond the kitchen window. It is stunning and thrilling to look at but it still feels hollow. This is because it is, frankly, a bang-out sentimental moment, a heart-tugging scene that practically begs us to live our lives to full before it is too late. But it is a heart-felt plea from a show that is otherwise rather cool and instead of weeping unashamedly, I shift about uncomfortably in my seat.