'Spine' review or 'Don't judge a book and all that.' 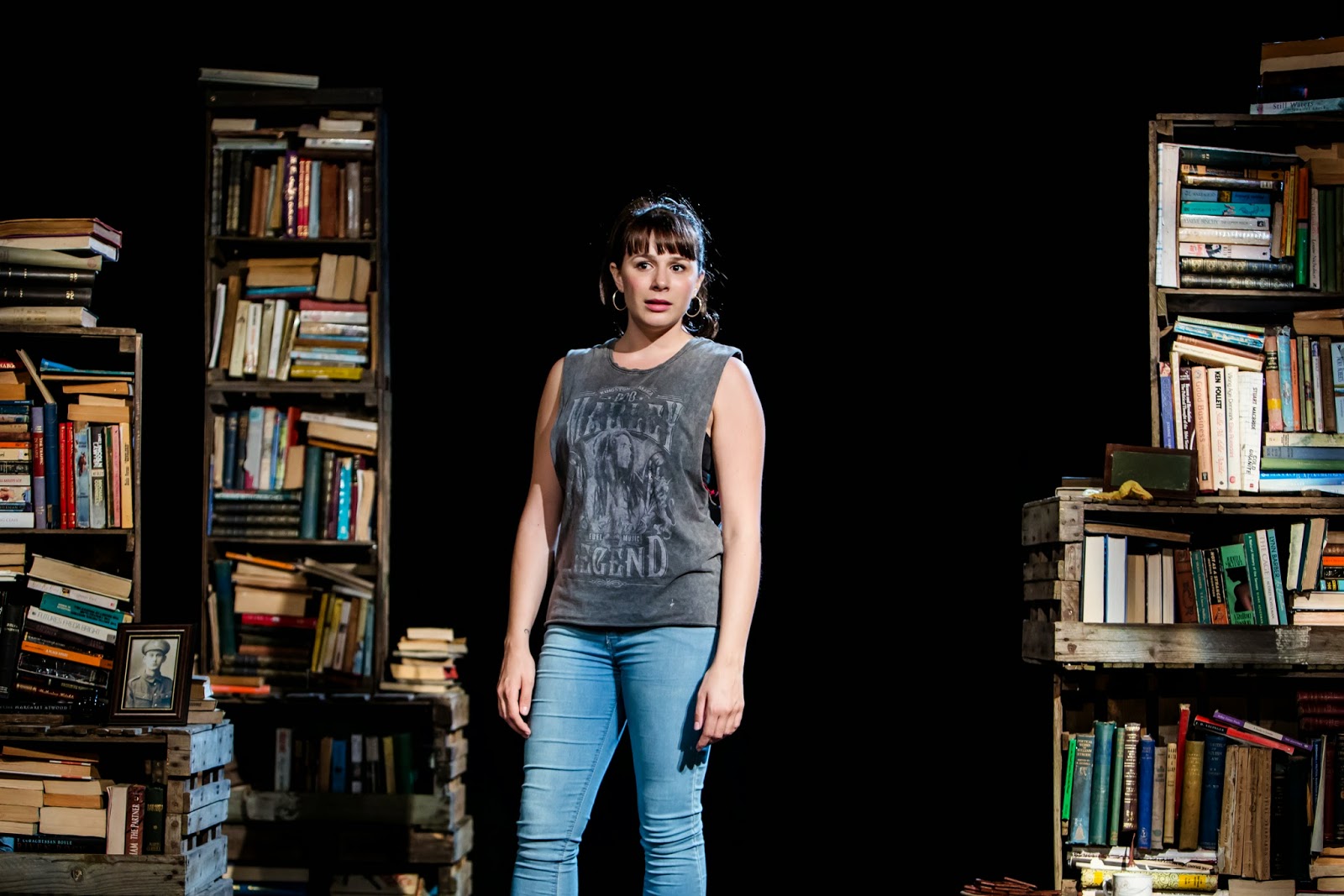 ‘Spine’ is really quite cheesy in parts. It is a one-woman show about a troubled teenager, Amy, who gets kicked out of home and ends up befriending a tough old biddy. The two might be worlds apart but they have a lot to learn from each other.  It sounds a little twee, doesn’t it? But Clara Brennan’s free flowing script practically rattles with energy – as if the characters are trying to burst free of the text - and Rosie Wyatt’s performance is one of the fiercest yet most gentle performances I have seen all year.

There’s a peculiar intensity to Wyatt’s performance right from the off. The small upstairs studio at Soho Theatre grows thick with concentration and suspense, in a way that only happens at the theatre. Wyatt is deep inside the show from the off and so, in turn, are we.

This is an actress with natural theatrical instinct. She moves about the stage as if it had a million invisible little spaces we mere mortals cannot see. The set, designed by Alison Neighbour, is simple – just a few crates and bundles full of books, which creates a playground for Amy to roam about in. When Amy is at the pub, that modest little stage fills with the bustling energy of her bolshy friends. When Amy is at home with her depressed mum and bemused step-dad, she looks somehow isolated – despite the fact it is always just Wyatt alone on stage throughout this electric one-woman show. When Amy meets widow Glenda the space seems to open out, as Amy climbs up and around the piles of books and her horizons literally and figuratively expand.

It’s not just the space that Wyatt commands with such instinct – it is also her voice. Wyatt is helped in this respect by Brennan’s script which motors and tumbles along at a remarkably instinctive – character led – pace. You only need to look at the script, full of pauses and capital letters and great long paragraphs and rows of stuttered short text to understand how alive this writing is and what a gift it might prove to the right type of actress.

Wyatt is propelled forward by Brennan’s script, tumbling through the angry bits, freezing at the moments of shock and slowly, slowly, reaching some sort of manageable pace, as Amy begins to feel appreciated and loved and stops running; starts listening and learning and even reading some books. This pacing is such a crucial part of the show. The angry freneticism of the early scenes plunges one into the tumult of the teenage years, when life feels a lot like is a weird and manic race, the finish line nowhere in sight.

Bethany Pitts keeps the production low key and it is left to Brennan’s script and Wyatt’s sheer force of personality to keep the show running and sparking in all the right places. Brennan is seriously good at summoning up complete scenes – and rich characters – with just a few carefully picked phrases. This allows Wyatt, as Amy, to pack the stage with life in an instant. We hear about Amy’s mother who has ‘too much water’ and is sad all the time and her hunched body quickly materialises on stage. We hear about Wyatt’s sleezy boyfriend, who slaps her vagina after they have sex for the first time and cries out triumphantly, ‘Ah OWN that pussy!’ There’s such vibrancy to Brennan’s dialogue that it only takes a second for her imagined characters to wriggle on stage and into our heads.

And then there is the old biddy herself, Glenda. What is interesting and moving is how smooth the transition feels from Wyatt’s chest-thrusting, aggressive Amy to the bent over widow Glenda, who despairs of the ‘posh cock club’ politicians who have slowly dismantled the Britain she hoped for – and that her husband once fought for – in front of her eyes. There is otherness that binds these two together – a ‘beautiful anger’ – that lights up them and the show from within.