'Zilla!' review or 'If lego could talk.' 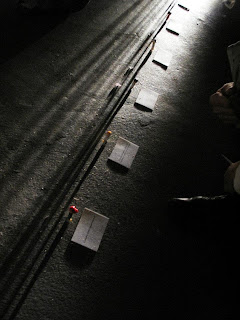 Curious spectators swarm around a lattice of moodily-lit, lego figures. The light is constantly disrupted by the wandering crowd, but it's still possible to read the captions beneath each plastic trooper; 'An anonymous star who has absolutely no chance of surviving this', 'Miss Wyoming 1987', 'A forgotten reality TV star'. And, sitting proudly aloft a preposterously large, white plastic horse: 'The only person left who has any idea what to do.'
Andy Field's 'Zilla!' begins with a provocative but simple installation, in which a line of lego figures patiently await their destruction. It is a clever piece, which thoughtfully incorporates the viewers into its design. As the spectators bend down to study the figures more closely, they look like vultures clustering eagerly in a graveyard. The light skates about erratically and, despite the giggles prompted by the witty captions, things feel ominous.
Having been directed to pick out a lego piece, the audience is led into a starkly lit room. At a desk sit two casually dressed actors, massive microphones looming in front of them. We are commanded to travel up high – 'where Icarus flew so briefly' – as Field's script takes us on a bird's eye view of an English city, as seen now and 'way back then'. As one actor speaks, the other crawls about the floor below, inking in a blueprint of the remembered city.
Field is a brilliant observer; precise but poetic too. As the narrative unfolds, one gets the impression of a wide-eyed and open-hearted soul, drinking in and describing every little detail. But the writing isn't quite tight enough and, with its stubborn arbitrariness, never reels us in. For such a stark piece, all-but unaided by theatrical effect, it feels too vague. It lacks the cohesion of a Chris Thorpe story-show, which binds the audience in a web of strange but consistent logic. Field has the ability to write a show of similar poetical power but his intellectual ambition – his desire to push ideas through his narrative and challenge his audience – has slightly diluted this piece's impact.
There isn't enough to cling onto and one's attention starts to drift. What remains compelling throughout, however, is the blueprint that gradually spreads across the floor. A stubborn desire solidifies in the spectator and one longs for the map to complete itself; for the once empty space to be obliterated with white lines and strange patterns. It is an odd sensation, which seems to channel the same energy and human inclination that causes cities to spread with such ferocious speed. Urban sprawl, this production suggests, happens because humans like spaces to be filled and patterns, destructive or not, to be completed.
This same idea is expressed later on, when the spectators are invited to place their chosen figures on the near-complete city map. The map offers 'acres' of open spaces and, yet, every single spectator placed their lego lad next to a line, an imagined building or road. No one seemed willing to abandon their lego to the wild and the little figures cluster, instinctively, together. The audience might not be ensnared by the narrative but Field's ability to 'kidnap' his audience – to use us to complement and complicate his ideas - is arresting indeed.