'The Tempest' review or 'Where did all the magic go?'

'The Tempest', William Shakespeare
Theatre Royal Haymarket, Wednesday 8th September 2011
Written for Culture Wars
Two white sheets hang like ropes, a rainbow lightly splashing them with colour. Delicate spirits swing from the sheets, performing gentle acrobatics mid-flight. Strains of swelling music, reminiscent of 'Les Miserables', herald the entrance of the Queen Spirit. This is Prospero's wedding show, the supposed summit of his powers, but it looks a lot like a Disneyland Parade. Nunn's 'Tempest' might have some great storms but the strange magic of Shakespeare's play has been sanitised and contained.
Nunn is brilliant at creating Blockbusters – he might just be the Andrew Lloyd Webber of non-musical theatre – but he isn't known for his mad invention and his production is sapped of mystique. Prospero's spirit side-kick, Ariel (Tom Byam Shaw), is particularly and disappointingly grounded. Sure, he flies about a lot but the strings are always on display. Ariel's songs are delivered in a strange falsetto and the effect is not spooky but embarrassing. It is a bit like watching a kitten sing. 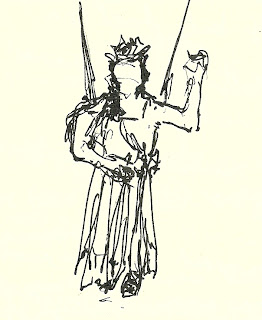 In fact, the music is the most frustrating element, perhaps overly influenced by Nunn's work on West End musicals. 'A thousand twangling instruments/ Will hum about mine ears', coos Caliban and yet most of the music sounds swiped from a chorus line or, even worse, has the innocuous twang of ambient restaurant music. More often than not, the music makes people and moments smaller. When Caliban sings of his 'freedom', it is expressed through the type of bold, clean chords you'd expect of 'Lion King'. Beastly it is not.
In a recent RSC children's production of 'The Tempest', Caliban was played by a massive green, papier mache monster. He was entertainingly grotesque, a creature from another world. Yet here, Shakespeare's 'abhorred slave' is re-imagined as a black man in a massive shawl. Giles Terera delivers his lines intelligently but no amount of spitting or hissing can elevate him to anything other than an unfortunately uncouth chap.
The unflattering comparisons with other, more imaginative interpretations, continue to surface. When Trinculo and Sebastian are entranced by Prospero's magic and distracted by beautiful clothes, golden garments are duly hoisted out on a long washing line. It's all a bit predictable, especially when one remembers Cheek by Jowls' recent show, which saw the two scamps stumble out of the woods and into a blazingly white department store, gleaming with designer goods. Cheek by Jowl's effects were brilliantly dislodging but this production – despite a massive number of harnessed acrobats – keeps it feet firmly on the ground.
What Nunn's shows never lack is heart and the later scenes, in which which Prospero grants forgiveness and freedom to those who have betrayed or served him, work well. Ralph Fiennes' Prospero is no mad magician but a weary and cynical chap, constantly inviting us to to laugh at others' weaknesses. It is a low-key but authoritative performance and the closing, more emotional scenes, feel personal and close. But, for a play starring the great Dark Lord himself, this is a show surprisingly short on black magic. 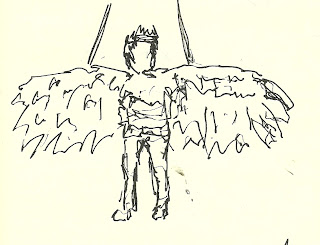