'The Wild Bride' review or 'A mouth stuffed full of jammy dodgers.' 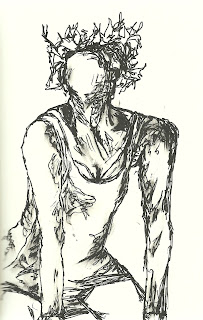 Watching a great 'Kneehigh' production – and 'Wild Bride' marks this company's definitive return to form – is to be young again. It is endless sleepovers and spooky tales exchanged breathlessly in the dark. It is simple pleasures and giddy thrills. It is theatre boiled down to the basics and made to blaze.
The story is devilishly simple and asks, what happens when a father sells his daughter to the devil? It is also a story punctuated with paint. When the daughter is deemed too clean for the devil, she is bathed in oozing, brown mud. When her hands are cut off at the devil's command, they emerge from a bucket dripping in red. And, when she is considered still too pure, her hands are sunk in the purest white.
The stage, too, is streaked with rainbow lighting. When the devil tempts the father with golden trinkets, the action plays out against intoxicating purple haze. Bright white lightning flashes rip through the devil's most dastardly moments. And, when the girl is banished to the woods, the stage bleeds green.
Amidst this kaleidoscope of colour is a live soundtrack, played by a precociously talented cast. The devil (Stuart McLoughlin) manipulates those around him with his fiendish falsetto and creepy, laid back blues numbers. The daughter is played by three actresses. The first, Audrey Brisson, sings like she is forever lost, her snatched voice haunting the stage. Patrycja Kujakska, last seen stomping her way through 'Red Shoes', is as expressive with her violin as she is with her extraordinarily open face. And Eva Magyar dances as if it is the only way she knows how to speak.
There are, admittedly, a few too many 'I am a tree moments'; expressive dance sections that are undoubtedly beautiful but risk bringing down the pace. 'Kneehigh' can, for all its awesome talents, sometimes get a little earnest. However, they've found a brilliant, complementary member in the effervescent Stuart Godwin, who plays the girls father and, later, her lover. He is Kneehigh's version of a pantomime dame, gamely interacting with the audience and ad libbing at will.
It is the collective wit of this company that sets their show apart - both from other, rather straight-faced experimental shows and from their own, previous ventures. Humour sparkles everywhere. Whilst the daughter is exiled in the woods she stumbles across a pear orchard, represented by dangling light bulbs. What could've been a throwaway moment is a visual tease to remember. And, when the prince and his new wife consummate their love, they are accompanied by childlike instruments and masses of party poppers. Even in the supposedly 'grown up' moments, Kneehigh hangs onto a childlike glee that has all the pleasure of a mouth stuffed full of jammy dodgers.