'Truth and Reconciliation' review or 'If you think these seats are hard, you should try taking our places.' 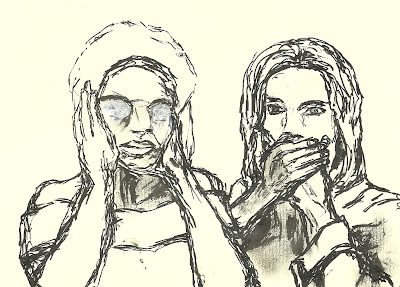 Countries and dates are etched across blackened walls, reminiscent of the war memorials that list the lines of fallen soldiers. Empty chairs cluster on stage, around which the audience tightly circles. Black clods, dislodged by the slightest movement, dance across the floor. Not a word has been spoken but Tucker Green's play, 'Truth and Reconciliation', screams of endless and awful loss.
It's no surprise Tucker Green - with the help of Lisa Marie Hall's thoughtful set - expresses so much with just silence, since she is more composer than playwright. She does not write plays but symphonies and her words are notes, their meaning changing with each new careful arrangement.
An eclectic range of families, from South Africa, Zimbabwe, Bosnia, Serbia, Rwanda or Northern Ireland, play out their stories in contrasting, minor keys. Sometimes the families, each confronting unthinkable tragedies, sing in harmony. Often, they clash, with one lonely family member struggling to be heard against her babbling and frightened relations. The timbre of Tucker-Green's dialogue is so expressive that one imagines, were the words to be removed completely, the meaning would remain.
A Rwandan widow, Stella, confronts her husband's murderer but, as she hammers out the same question ('Did he cry?'), her family murmurs its dissent. As Stella (Wunmi Mosaku – splendidly brave) edges closer to an answer, the fearful whispers crescendo into cries: 'This is no help/Tell her to stop!' The murderer does not reply until much later but those deafening chants predict the nightmarish narrative to come.
It is what the characters refuse to hear or say that reveals so much. Cecilia Noble is brilliant as the booming South African Nan but it is Pamela Nonvete's Mama, frozen at the edge of court that will explain her daughter's death, who lodges in the brain. Although Nonvete's Mama later erupts with molten rage, it is the silent promise of her explosion that shakes the stage.
When Tucker Green is not speaking through her silences, she uses her sliding poetry to reveal the families' volatile dynamics. A Zimbabwean husband and wife sit together, hands intertwined and initially in synch. The wife intends to speak out against her countrymen and her husband, gently but oh so frantically, attempts to dissuade her; 'Let your unsure mind tell your unsure mouth to surely be quiet.' But the wife will not listen and offers her own compact reply: 'I, we, you can leave.' The husband persists: 'There are people paid to say/Born to say...People who don't stop saying things/At the right time/Better than you.'
It is hard not to quote Tucker Green in full since her words connect so cleanly, taking her characters on a fiercely winding journey at extraordinary speed. The poetry continues to flow, eroding the deception and cowardice that has clouded countless families' lives, revealing rock hard gems of truth beneath the surface.