'The Phlebotomist' review or 'Do you want to review your profile?' 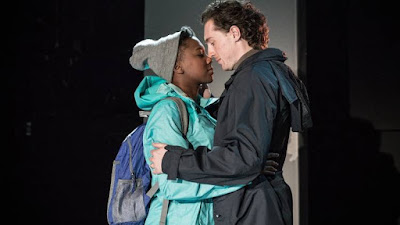 And you thought Tinder was bad. Ella Road’s first play, ‘The Phlebotomist’, is set in the not-so-distant future, a time when a person’s genetic profile and ‘rating’ is a key component of their dating profile and a chief determinant of future happiness. With one quick blood test, any potential mental or physical weakness – a propensity for depression or a lurking cancer gene – is laid bare and a genetic rating calculated. There’s no outrunning the future in this slightly wobbly but worryingly plausible dystopian drama.
Sam Yates’s taut production unfolds on a traverse stage, with a clinical runway that cuts through the audience. Designer Rosanne Vize has created a stark and unnatural space: a world in which fluttering leaves are projected on a series of surrounding screens and the actors feel like medical case studies, presented for our inspection.
Spontaneity is all but impossible in this minutely-monitored new world – only our young lovers Bea (Jade Anouka, pulsing with energy) and Aaron (a brooding Rory Fleck Byrne) do manage it for a while. The two meet at the hospital where Bea works as a phlebotomist (someone who takes blood) and their early courtship – silly, joyful andpretty hot – is when Road’s writing really zings.
But it doesn’t take long for the looming future – mapped out with shocking clarity – to hack away at this young couple’s happiness. The relationship and society-at-large begins to collapse and the screens fill with visions of violence and corruption. But as the intensity ratchets up, the production splinters. The characters, including that of Bea’s troubled friend Char (Cherrelle Skeete), begin to feel insignificant in face of the murders, trials and public protests that blare out from the various TV screens. Bea and Aaron’s story starts to feel oddly out of place, a little too small and just a touch shrill.