'Reared' review or 'Too many cooks and all that...' 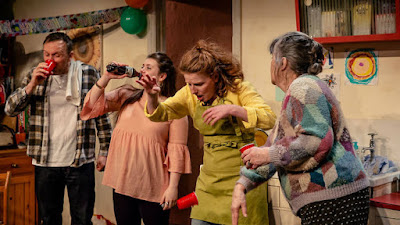 Grandma is losing her mind; mum once lost her mind (and found it again); dad is trying not to lose his temper and teenage daughter Caitlin is pregnant. John Fitzpatrick’s new play ‘Reared’ isn’t short on action and unfolds in a crammed and fraying kitchen(Sammy Dowson’s design is unshowy but excellent). It’s a fitfully entertaining drama, which ultimately veers off track but has some very thoughtful things to say about the fraught push and pull of family life.
Mum Eileen stands at the centre of things. She has had mental health troubles in the past and is now convinced her mother-in-law Nora (Paddy Glynn) has dementia. But distracted husband Stuart (Daniel Crossley) and pregnant daughter Caitlin (DaniellePhillips, sparky) will not listen. What will it take for the lines of communication to clear and this family to truly hear each other?
Around this central premise swirls an increasingly chaotic storm of subplots. Sarah Davey-Hull’s direction is a tad heavy handed – every scene change is punctuated with the same throbbing lights and music – but also frustratingly hands-off. Much more could’ve been done to anchor the group scenes and clarify the tone of this production, which is arch and funny one second, naturalistic and brooding the next.
Shelly Atkinson, playing mum Eileen, holds the family and production together with a finely textured and quietly simmering performance. After much stalling (Fitzpatrick holds onto his secrets a little too tightly), Eileen’s past is unearthed in a shattering monologue about post-natal depression. She remembers her burning desire to protect her daughter, coupled with her struggle to merely walk up the stairs. It’s a brilliant scene that throbs with the tension between comfort and pain, warmth and rejection that is so central to family life.