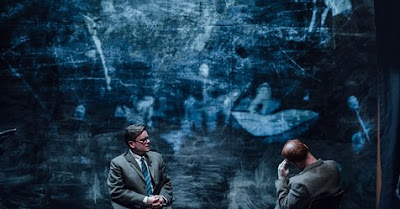 ‘Sapiens: A Brief History of Humankind’ has been sitting on my bedside table for yonks– but I could never be arsed to read it. But after watching its stage adaptation, ‘Secret Life of Humans’, I can’t wait to begin Yuval Harari’s book. I’m also desperate to learn about how we read human footprints, and the ways in which our bodies hold memories of our ancestors. I’m gagging for knowledge – all thanks to this deeply thoughtfulshow, which ripples with fascinating ideas and images.
It’s all a bit ‘full on’ and might’ve been terribly dull – but New Diorama boss David Byrne’s adaptation purrs with purpose. There are two strands, which play off each other in increasingly interesting ways. The first strand is a series of lectures, occasionally stiff but always interesting. The lectures explore the themes discussed in Harari’s book, namely: what is it that makes us human?
The second strand covers the life story of British mathematician Jacob Bronowski (Richard Delaney, pleasingly enigmatic), a scientist best known for his TV series ‘Ascent of Man’. When Bronowski’s grandson discovers a secret study, full of Bronowski’s work on WWII bombs, he’s forced to reassess his opinion of his grandfather and his ideas about human progress. Just what use is human knowledge if it ultimately brings about our destruction?
Byrne and Kate Stanley direct with care and panache and the set and screen projections riff brilliantly on the play’s central concerns. Jen McGinley’s design is a testament to the human imagination: the looming black space suggests a cave, blackboard or study; a pair of bookshelves are rearranged in endless permutations. Zak Hein’s projections tease our senses, delighting us one minute and provoking and jolting us the next. There are no easy answers in here – no grand conclusions – in a show that inspires us to return to these collective spaces and continue to ask difficult questions.