'Chocolate Cake' review or 'Can we try a different filling?' 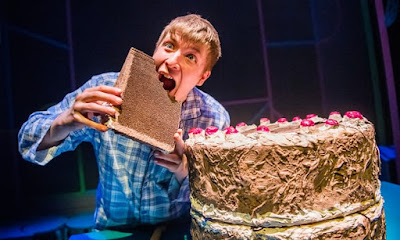 All kids loves cake but Wilfred, aged four, is mad for it. With a rather serious expression on his face, he tells me that cake is his friend. So he is the ideal person to take to this musical adaptation of Michael Rosen’s classic poem and some scenes in this production – basically, all the ones involving a huge gleaming cake – delight Wilfred. At one point he even drools. But this is a sweet treat and little more: glossy, tempting but ultimately pretty unsatisfying.
Sometimes a purely silly piece of theatre can turn out to be really good fun, but it’s hard not to expect more from a show inspired by Rosen’s writing. Rosen shows children every shade of life – dark and gloomy or bright and dazzling. But this lighthearted and lightweight adaptation – co-created by experienced hands Peter Glanville and Barb Jungr – asks too little of its audience.
Rosen’s epic children’s poem is essentially about a kid who wakes up in the middle of the night and gobbles down his brother’s chocolate cake. Glanville and Jungr have woven in a few of Rosen’s poems about hot food, fried eggs and baked potatoes, but a cluster of food poems does not add up to a theatrical feast. I hear Wilfred lick his lips during one scene, but he’s watching this play with his belly, not his brain or his heart.
Mark Houston, as young Michael, is the perkiest chocolate eater you might hope to encounter, and Aminita Francis is warm and engaging as Mum. The cast sing Jungr’s peppy songs with relish, but how much impact can you make belting out a song about being “full as an egg”? The only character with any real edge is moody older brother Joe, and Todd Heppenstall makes the most of some witty one-liners, particularly when it comes to his doomed, cake-free birthday (“This was meant to be the best day of my life!”).
Verity Quinn’s vibrant set is made up of a series of neon frames, which are easily manipulated to create bright new spaces. It fizzes with dramatic potential and comes to life during the night-time scene, as Michael creeps about his home. While it’s fun to see constant images of chocolate throb and spin on a huge screen thanks to animations by Will and Joe, it feels more like watching an iPad than a fully live production. Wilfred is usually inquisitive at the theatre, but he stops asking questions as he sits in his seat, mesmerised but muted.