'To Dream Again' review or 'Can we get a little more magic dust please?' 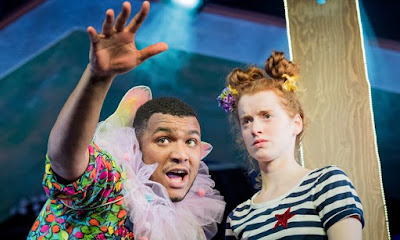 Before the show, I ask Qeiva (aged nine) what she associates with the word “Shakespeare”. Qeiva thrusts her arms forward and earnestly recites: “To be or not to be!” I promise her she’s in for a surprise. A Midsummer Night’s Dream is the starting point for Toby Hulse’s new play, but To Dream Again is really just a story about families, magic and love.
Hulse’s concept initially feels striking and fresh. Shakespeare’s Dream has been modernised: everyone speaks contemporary English and the story now revolves around nine-year-old Sophie (Hannah Hutch), whose parents are on the verge of divorce. Sophie is desperate to save her parents’ marriage. But “the course of true love never did run smooth” and – even with the help of a magical plumber and some potent love potion – Sophie discovers that some things simply cannot be fixed.
The early scenes ring true, as Sophie races up to her bedroom to escape her parents’ booming arguments. Amy Cook’s set is perched at an angle, as if Sophie’s home might collapse at any moment. When Mum and Dad argue, lights throb outside Sophie’s window and the stage rumbles. There are some giggles from the parents in the audience during these fights (“Do I have to do everything around here?” says Mum), but Qeiva and many of the children look shocked. This is a frightening scene for them to witness, the comfort of home-life turned inside out.
But these fights aside, director John Young’s show lacks pace, clarity and relevance. When the boiler breaks, mum (Rebecca Pownall – loving and familiar) calls in a plumber, Robin Goodfellow (Elliot Rodriguez), whose tools are covered in glitter. After a few laboured scenes (the jokes aren’t funny enough and the dialogue drags), we discover this plumber doesn’t just fix boilers – he might just be able to fix Sophie’s family, too.
With the help of some mysterious house fairies, Sophie and Goodfellow travel back in time. The floorboards glow and the stage transforms into a forest, sparkling in the sunlight. It’s all rather entrancing, but not for long. Sophie’s mum and dad appear – but now they are called Helena and Demetrius and they are speaking in tongues (or, as we might call it, “Shakespeare”). Sophie applies the love potion to her parents’ eyes, wipes it off, then applies it again, ad infinitum. Sometimes the parents speak “normal” and sometimes they speak “Shakespeare”. It’s very hard to keep up.
Shakespeare’s language has rarely sounded so foreign. Even when the characters speak in contemporary English they feel distant. Sophie is energetic and endearing but she speaks in a high-pitched voice that Qeiva later deems “babyish”. There are some magical moments in here but, with such convolutions and a central character Qeiva cannot recognise, this isn’t a dream that will linger.