'Chinglish' review or 'I will only say this once.' 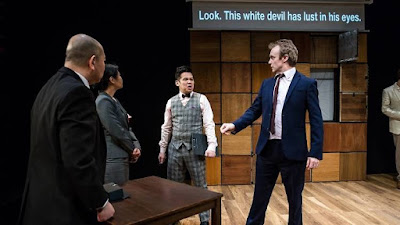 American entrepreneur Daniel Cavanaugh is trying to land a big business deal in China. Daniel runs a small family signage company – or, in the words of a Chinese translator: ‘His firm is tiny and insignificant.’ This is going to be tough. How to conduct business in a country where contracts mean nothing, relationships mean everything and almost anything meaningful is lost in translation?
David Henry Hwang’s comedy of cultures, 'Chinglish', is thoughtful and sharply observed. Andrew Keates’s pacey production – played out against Tim McQuillen’s wooden pane puzzle set – feels enjoyably bonkers. As Daniel (Gyuri Sarossy) attempts to secure a deal with the Minister of Culture (Lobo Chan), he struggles to communicate. The local translator is woefully inept and Daniel’s consultant, the bumbling and British Peter Timms (Duncan Harte), seems more interested in talking opera than business opportunities.
Director Keates has gone for big laughs and even bigger performances in this unabashedly broad production. This loud and shiny approach initially pays off and those with the lighter roles fare best. Lobo Chan is particularly good as the exuberant and slightly batty Minister, who has three mobile phones, at least two personalities and countless shady business deals on the go.
But the endless mistranslation gags wear thin and the subtler roles fall flat. Gyuri Sarossy is more manners than man as awkward American Daniel and his subsequent relationship with Vice Minister Xi Yan (Candy Ma – touching) is utterly unconvincing. That’s a shame, since the two have some interesting conversations about contrasting cultural attitudes towards duty and love. Despite these faults, there’s a certain commitment and affection running through this production that sustains it. Duncan Harte’s performance is slightly strained but his Mandarin is spot on and the stunning accuracy of his accent speaks volumes.