'The Diary of a Teenage Girl' - Can you read me like an open book?

The Diary of a Teenage Girl - Marielle Heller
Southwark Playhouse, 6th March 2017
Written for Time Out 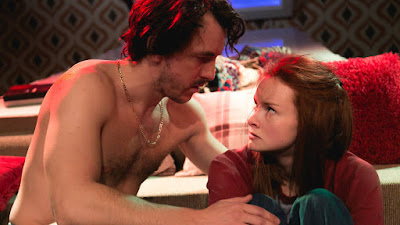 Dear Diary,
those thesps over at Southwark Playhouse have just put on a staged version of US! Everything about my life – beautiful fuck-up 15-year-old me – is out there! The sex sex sex with mum’s boyfriend, the drugs (ha!), the parties, and even my brilliant sketches. And guess what? It isn’t shit! Although I’m still not convinced that they really get me.
Minnie’s right, this adaptation of Phoebe Gloeckner’s graphic novel isn’t at all shite. It’s not in the same league as the recent film adaptation, fuelled by a wild performance from Bel Powley, but it does feel bold and original. And considering this is a play about a teenager’s relationship with her mum’s 35-year-old boyfriend, Andrew Parker and Amy Ewbank’s production is impressively light on its feet, funny, open and careful not to judge.
Andrew Riley’s set is slightly askew, with a looming bed and lurching window. It’s a nod to the topsy-turvy perspective of teenage life, as well as the drugs and alcohol that suffuse this story about love, sex, abuse and loneliness in ’70s San Francisco. Nina Dunn’s video design (inspired by Gloeckner’s illustrations) flood the stage with Minnie’s dark and brooding sketches. The scenes are choppy and abrupt and there’s a jittery energy to Marielle Heller’s script, as if a dark trip is just one snort away.
But not everything about this confessional drama rings true. Rona Morison’s Minnie is an intriguing combination of naivete and cynicism, but she also looks roughly the same age as her mum (Rebecca Trehearn – flinty, broken) and Monroe (Jamie Wilkes). It’s a failure in casting that takes the sting right out of Minnie and Monroe’s taboo relationship. The diary format also begins to drag and there are times when we long for Minnie just to live her life, rather than report it.