'Rosencrantz and Guildenstern are Dead' review or 'How many lives is too many?' 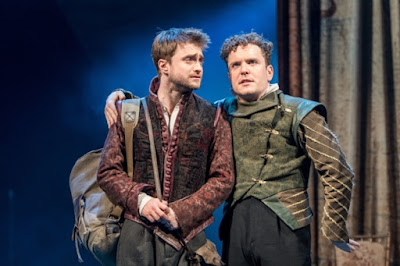 It’s 50 years since Stoppard’s breakthrough play first dazzled and dazed audiences. David Leveaux’s production, starring a spritely Joshua McGuire and a game Daniel Radcliffe, is lucid and lively. It’s a thoughtful and stirring adaptation – but Stoppard’s theatrical calling card occasionally feels overplayed.
It’s essentially Hamlet turned inside out. Two royal courtiers, Rosencrantz and Guildenstern, find themselves summoned to Elsinore. They’ve no idea why they’re here. As Hamlet and his family whirl around the edges of the stage, they stand frozen and - not unlike some of Beckett’s famous characters – wait for something to happen.
Anna Fleischle’s intriguing set has one foot in a period Shakespeare production and the other in a Dali painting. A vibrant cloudy sky sweeps across the ceiling and walls. The players are chalky-faced clowns – participants in a spooky-looking dumb show – while Rosencrantz and Guildenstern wear period costume, trapped in a play whose context is always on the slide, yet never quite embraces them.
McGuire’s Guildenstern is quick and agitated, his body perpetually in motion. When he smiles his face transforms – a lightbulb of certainty all too quickly snuffed out. Radcliffe is the lost puppy to McGuire’s master. He races after Hamlet and pals, desperate to join everyone else’s game.
The duo are surprisingly loveable (the crowd actually sighs when Rosencrantz tells Guildenstern he only wants to make him happy), but they’re missing intellectual fire-power. This is an indulgent play – Stoppard is keen to show off his smarts – and occasionally the pace drops and dialogue drags. It doesn’t help that the actors in Hamlet are seriously under-fired; the theatrical bubble bursts every time their scenes begin.
It’s down to David Haig, as the chief Player, to keep things lively. He is a stupendous presence, his character a glorious cross between Del Boy, Fagin and a sadistic circus master. When Haig speaks, the stage practically trembles. And when he describes the desperate loneliness of performing to no one – the awful reality of a life unwatched – Stoppard’s brilliant comedy no longer feels like a game.