'Sideways' review or 'Should this wine be corked?' 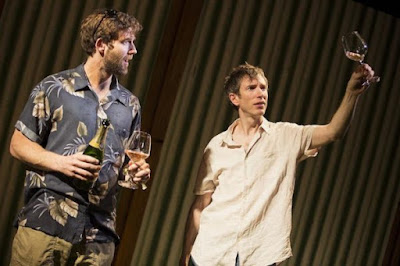 You remember Sideways, the film, right? You remember that sun dappled journey across the California wine country with the oddly charming Paul Giamatti as our guide? Of course you remember it – and what a warm and quirky delight it proved to be. Sideways the play has been adapted by Rex Picket – the writer behind the original novel – yet is worlds apart from the film. Replace all that charm and rippling emotion with crude misogyny and slapstick comedy. Cover up those gorgeous vistas with ugly brown screens, and trade in the delicately drawn relationships for hot-tub tumbles and sex. And boobs. And a little more sex.
What a fall from grace this is! Professional screenplay writers were brought in for the film adaptation but Picket has penned this play himself. That’s a real shame, since he clearly isn’t a natural playwright. This adaptation is clunky, crude and waffly. Every thought is verbalised, every tiny plot transition plotted in, every dot painfully joined up. The result is a play that feels over-extended, over-stated and underwritten.
The plot is scant: struggling novelist Miles (Daniel Weyman) and his horny pal Jack (Simon Harrison) take one last road trip across the California wine country, ahead of Jack’s impending nuptials. Along the way they drink a lot of wine, meet a lotta women and hit upon a few home truths. The big draw of the film was the gorgeous landscapes and Paul Giamatti, who injected the film with a rather beautiful feeling of hopeful melancholy. There’s no such subtle sentiment in David Grindley’s brash production. There’s also precious little to look at. Laura Hopkins’ set is criminally unimaginative and is essentially made of one enormous brown screen, which is folded into different shapes throughout the show. That’s it for our gorgeous Californian backdrop. A giant bar occasionally makes an appearance, as do a few creaky beds, a crap set of blinds and a cruddy restaurant booth. And that’s really it; that’s all we have to look at in a story which is largely about the beauty and mystery that lies just beyond the reach of our everyday lives.
Daniel Weyman delivers Miles’s pretentious declamations with a nice flourish, but it’s hard to shake off the memory of Giamatti’s original and far superior performance. Simon Harrison is properly appalling as Miles’ sex-obsessed friend Jack. Harrison delivers the first line in a booming voice and directly to the audience and spends the rest of the night bludgeoning us with his misogyny. Women are referred never by their names but as ‘chicks’ or ‘that woman’. Miles’s lover Maya (Ellie Piercy) and Jack’s ‘love interest’ (ha!) Terra (Beth Cordingly) both get their boobs out for no discernible reason. The other female roles consist of mind-numbingly stupid waitresses or doddery literary agents. Crude jokes and crass analogies (‘That’s like sniffing a woman’s butt before you have sex with her’) pepper the script and there’s a casualness about the way that women are laughed at and denigrated that takes the breath away.
Others might argue that I’m taking this much too seriously – that it’s all just a bit of fun – but why is the joke consistently on the women? Miles and Jack are gobsmackingly self-involved and – yet – by the end of the play they end up with their women. Why? I remember such warmth and humour in the original film but this play left me cold, angry and profoundly disappointed with the opposite sex.