Richard III review or 'Bad is the world...' 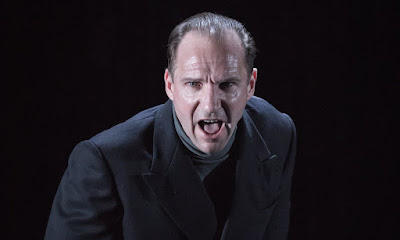 There’s an aching pertinence to this version of Richard III, which I’m not sure is entirely earned (I can’t figure out the driving force behind Goold’s production) – but is horribly powerful all the same. There is something so awful – given the terrible news that is pouring in at the moment - about watching a show in which evil wins. This is a painful, shameful and frightening piece of theatre.  ‘Woe is England’, comes the cry, and fuck does it sting.

Rupert Goold has dressed his Richard III (including an exceptionally elegant Ralph Fiennes) in contemporary garments – and framed the production with references to last year’s discovery of King Richard’s bones in a car park in Leicester. But despite this specific framing device, the modern-day context feels fuzzy around the edges. Mobile phones are occasionally used but not with no real commitment. The women wear modern dresses but their submissive behaviour is positively medieval. So, yes, a stinging sorrow clings to the audience – but that sorrow feels like a slightly fortunate bi-product of Goold’s beautifully gloomy production, rather than something that has been carefully teased out of us.

Still, there is glibness about the violence that Richard reaps that is deeply upsetting. Fiennes is a relatively restrained Richard and is careful to keep the spitting ferocity of his Richard hidden until the last possible moment. First we are charmed and then we are appalled. Fiennes smiles and sneers and toys with us. He wiggles his eyebrows and pauses coolly over his words; his speeches drip with disdain for the spineless creatures that lay in the path of his twisted form. There are few who can match Fiennes for on-stage charisma and the audience is mesmerised and appalled. It is a hateful experience to enjoy this Richard.

Hildegard Bechtler keeps the stage dark, glittering and open, with plenty of space to hide real horrors. A huge metal orb hangs above the stage and glows. It comes to mean all sorts of things: it is the God that has forsaken Richard’s world; it is the goodness that lies beyond; it is the crown that taunts all those who stand beneath; it is the nothing to which this world has been reduced.

There’s an awful emptiness about this production that hits the audience, cold and comfortless. But this emotional shallowness has some strange consequences, especially on the female characters. Goold’s show has no space for fragile emotion and Margaret, Anne and Elizabeth – who are so wounded and conflicted by Richard’s actions - are all-but blotted out. Anne (Joanna Vanderham) spits and shouts at Richard but we do not feel her pain. Margaret (a slightly lost looking Vanessa Redgrave) floats about the stage, clutching at a baby doll and prophesizing doom – but this hard and cold production has no time for Margaret’s shimmering threats. Elizabeth (Aislín McGuckin) is casually raped by Richard, who barely stops to catch his breath as he rams himself inside of her. The production steamrolls on and the audience is given no time, no space, to feel the horror of Elizabeth’s abuse.


There’s so much ugliness crammed in here (and not always with good reason) - but is the moments of hope and light that cut the deepest. The death of innocent Clarence has never been this painful. Scott Handy finds such tender passion, hope and fear in his final speech, as a desperate Clarence pleads for his life. Clarence describes a recent nightmare; a terrifying journey through the dark depths of the ocean, where ugly creatures crawl through emptied skulls. He talks of a sunken world that has turned to dust and it is our world - and he is our last hope. The stage glows with something good and, for one beautiful moment, it feels like the murderers might let Clarence go.  But then the greed, the darkness and the doubt set in and Clarence – and all the light that burned inside him – is snuffed out for good.