'Fossils' review or 'What lies beneath?' 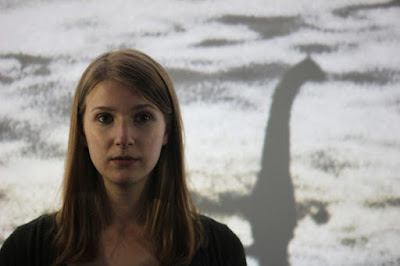 Fossils feels like such a personal show – packed with quirky details and musical flourishes – that I was surprised not to find the writer, Nel Crouch listed as one of the actors. She is, however, the director of her own music-infused and off-beat play and – according to a biography I found online – Crouch’s very own jumper also makes an appearance. That feels about right. This is a cosy and charming show; the theatrical equivalent of an all-night chat in your bedroom, with only your most trusted (and slightly bonkers) friends and private memories for company.
The story is a relatively simple one and – in all honesty – probably the weakest element in play. It’s all the nutty little flourishes, winking characters, madcap musical instruments (I think I spotted a theremin and some sort of accordion) that make this piece stand out. The story itself is trying to be quietly textured, magical and moving, but doesn’t quite get there. It revolves around the freakishly focused scientist Vanessa (a suitably sensible Helen Vinten), who has spent most of her 28 years hidden away in the lab – anything, rather than think about her father’s disappearance when she was just 16. But when Loch Ness – a long time obsession of Vanessa’s father – hits the headlines, Vanessa goes in search of missing monsters and memories of her own.
The story itself ties together pretty well but the emotional hot-spots feel lukewarm. That’s largely because the relationship between Vanessa and her absent dad (who is represented by a plastic toy dinosaur) isn’t built up properly. There’s something rather gorgeous about the connection this play is trying to draw between that great mythical Loch Ness – lurking somewhere in the depths – and Vanessa’s missing dad, but these connections don’t quite fuse. There are a few little sparks but, mostly, Vinten is left having to conjure up grand emotions that haven’t quite found their way into this bubbling and sparky script.
So the emotions feel a little off but the actual framework of this piece – and all the quirky little details that have been poured into it – are distinct, impressive and properly good fun. Rebecca Woods’s design looks like a cross between a chronically underfunded lab (Vanessa and her two PhD lab assistants seem to have only two tanks and two pipettes to work with) and a hazy memory of a children’s toyshop. There is a low-fi feel to the show (plastic dinosaurs and fairy lights make frequent appearances), which emphasizes the childish joy inherent in any experimentation, as well as the way in Vanessa has been frozen in time by her father’s disappearance.

There’s an easy and playful energy between Vinten and the two lab students Dominic (Adam Farrell – a natural comic) and Miles (David Ridley) and a lovely relaxed feel to the show in general, which is happy to stop, pause, and wink at the audience. There are lots of calm and still gaps in the script too: Crouch doesn’t try to colour in every tiny moment and, instead, rippling stretches of the show are filled with eerie twangs and melancholy sweeps from the many-instruments that Ridley and Farrell play. There’s a lot of soft space to get lost in; to think about the gaps our childhood’s open up in us and the way in which we might find magic – rather than misery – in those strange and empty spaces.