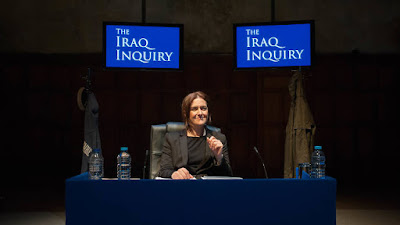 When the Chilcot Inquiry (an investigation into Britain’s 2003 invasion of Iraq) is finally released this July it will run at 2.6 million words. Richard Norton-Taylor’s condensed stage version is a mere 20,000 words. Frankly, I wish it was shorter. Norton-Taylor might be a fine journalist but he is no great shakes as a playwright and this verbatim show, as important as it might be, is dull as anything. It’s hard to get outraged when one is this bored.
James Turner Donnelly’s design replicates the original inquiry set-up which was not – as you might imagine – a visually dazzling affair. Sir John Chilcott (played with oozing condescension by Raad Rawi) and three other panellists huddle around their desks and a dizzying stream of witnesses sit opposite them. Large TV screens hang overhead and the stage is bathed in a cool white light. Director Matt Woodhead occasionally plays some relevant news footage but, for the most part, the screens mirror the action on stage. Folks, this isn’t verbatim theatre at its most imaginative (who’s up for a ‘London Road’-style singalong?)
There are some shocking facts lurking in here but they don’t make the impact they should. During one chilling interview with a suitably slippery Gary Pillai, the Attorney General’s scepticism about the invasion transforms into approval as if by magic. Jack Straw ducks and dives crucial questions about military preparation, Alastair Campbell avoids saying anything concrete at all – and there’s something terribly important about a missing 2nd UN resolution, although it all feels a little blurry.
A few personal anecdotes from veterans and Iraqi refugees have been woven into the show, but they feel crass alongside all that cool political finagling. The final interview with Blair (Rawi again) is particularly disappointing. His interpretation is a bit too ‘Spitting Image’: all those wide smiles and smug giggles prove a distraction and, once again, Blair slips out of our grasp.