'The Iphigenia Quartet' or 'Do you want another roll of the dice?'

The Iphigenia Quartet
The Gate Theatre, 3rd May 2016
Written for Time Out 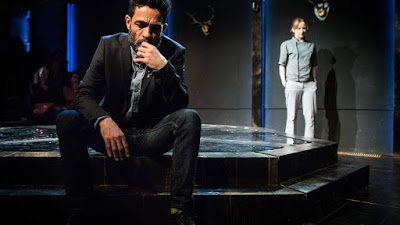 It’s marathon season. We’ve had Shakespeare marathons (‘Kings of War’), Greek marathons (‘Oresteia’), the actual bleedin’ London marathon – and now we’ve got more Greeks in this epic relay race.
Four writers run with the story of Iphigenia, who was sacrificed by her father Agamemnon in order to appease the gods, get the winds blowing and kick start the Trojan War. It’s a properly impressive endeavour, which highlights the endless scope of Euripides’s tragedy – but all of the stop-starting is pretty exhausting and prevents the show from building up a head of steam.
You’ll have to go to The Gate on a Saturday to see all four parts together: otherwise your ticket price gets you a double-bill of two tales (either ‘Agamemnon’ plus ‘Clytemnestra’ or ‘Iphigenia’ paired with ‘Chorus’).
That’ll still be enough to get the head whirring. Each writer explores the story from a different angle and in a distinct style. We get jet black poetry in Caroline Bird’s searing ‘Agamemnon’ and provocative playfulness in Lulu Raczka’s ‘Clytemnestra’, which dances around the edges of Iphigenia’s story, teasing and probing the audience.  Suhayla El-Bushra’s ‘Iphigenia’ is blunt, modern and very funny and Chris Thorpe’s ‘Chorus’ interrogates the audience’s dark unconscious desires.
Every turn of the dial churns out wildly contrasting characters and the actors – who double across the plays – deliver brave, if not slightly jagged performances.  Andrew French’s Agamemnon is a cowardly drunk, whilst Anthony Barclay’s Agamemnon is calculating and brutal. Clytemnestra is wild with grief in one play (Sharon Duncan-Brewster owns the stage) and pulsing with pragmatism in the next (Susie Trayling). Throughout it all, Iphigenia’s story shifts and we watch her (Shannon Tarbert) slide between trembling victim and triumphant heroine.
The only thing that stays consistent is Cécile Trémolières’s cool and gloomy set, with a sacrificial platform at the centre. Otherwise, the slate is wiped clean with every play. It’s a jolting and challenging ride, especially since most of the writers adopt a thoughtful but super-wordy approach. We’re left victorious (maybe even a little smug) at having completed it all – but totally out of breath.