'Monster Raving Loony' review or 'Where's the joke inside the cracker?' 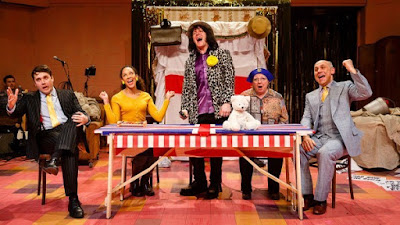 We don’t have nearly enough fun in the theatre. The number of times I have dragged myself back from a show, my brain whirring but with a faint air of misery wafting about me! It can all get a little exhausting. ‘Monster Raving Loony’ – James Graham’s latest theatrical adventure – is an antidote to all that tense and tortured theatre. This is a glittering burst of pure entertainment. It’s a bloody smart show, too, which has a lot to say about the rotten heart of politics – but Graham delivers his ideas with a wry smile and quick slap to the bum. I haven’t felt an audience this happy and involved in quite some time.

I also haven’t seen actors have this much fun in zonks. Some of them – particularly the older performers Joanna Brookes and Joe Alessi - look set to burst with the sheer thespian thrill of it all. They are clearly having a blast although, Christ, this must be a knackering show to take on - especially for Samuel James, whose all singing/dancing/winking/miming turn as Lord Sutch is nothing short of heroic.

Graham has chosen to tell the story of Lord Sutch – the slightly funny looking chap (think top hat and lots of badges) who formed the Monster Raving Loony party in the 1980s – through the history of British comedy. Sutch’s early days in politics (the man stood for a total of 40 elections from the 1960s onwards) are told via a Beano sketch, in which an idealistic Sutch tells a scoffing Lord Snooty (Jack Brown) that post-war Britain offers opportunity for all, regardless of class. Fat chance. This is a motif that’ll continue across the years, as Lord Sutch tries to break into a rotten rigid system that will not be broken.

Sutch’s political escapades are told through a whirlwind of comic sketches and musical skits: Charlie Chaplin, Ken Campbell, Morecambe and Wise, Hi de Hi, Allo Allo and Abs Fabs all make brief and shiny appearances. Amazingly, Samuel James manages a half decent impression of every last one of ‘em. Beneath all these batty skits, dark messages gather: what a performance politics is, and how empty at its heart! One line hangs in the air indefinitely: ‘What’s the point of power if power is the point?’

Graham has set himself and his actors one hell of a challenge and there are, of course, some dips. The younger actors, despite tight directing from Simon Stokes and guest comic director Cal McCrystal, struggle a little with the 50s/60s performance styles. The slapstick doesn’t feel quite slappy enough. The audience interaction segments are – as is so often the case – a little duff. Joint sing-alongs and impromptu concerts just don’t work with a London audience. Instead of drawing us deeper into the show they make us pull back and step, gingerly, outside of things.

There’s also the risk of overkill as we watch Sutch – the most glorious example of the British underdog – doggedly persevere with his political and social mission.  There are so many different sketches, songs and impressions in here (roughly 2,017 on my dazed count…) that the audience begins to flag and so too do the actors. The play risks descending into a version of ‘Spot the Sketch’, which is a real shame since this is so much more than a game of theatrical bingo.

We also risk losing Lord Sutch’s character amid all the impressions. Of course, this loss of Sutch’s real self is largely the point. Lord Sutch – and politics in general – is just one big performance. But what lies beneath these performances, what’s happening at the heart of it all? Lord Sutch was also a depressive (like so many comedians) and eventually killed himself – but Graham and director Stokes don’t handle this sober transition brilliantly and the depression angle feels slightly shoe-horned into the show. There could’ve some been darker edges to all those skits; a fading or turning in at the corners of all that comedy. The joke is on Sutch, you see. The joke is on us all.