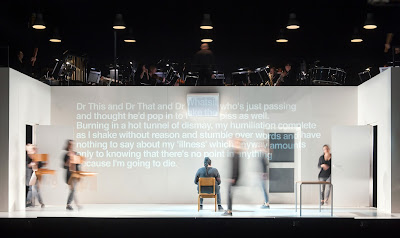 The first time I read Sarah Kane’s ‘4.48 Psychosis’, it felt like an illicit act – as if I had stolen something that should never have found its way out into the open. The writing in Psychosis – Kane’s final play before she committed suicide – is so exposed and so personal that to read it is to steal a tiny piece of her soul. I have never seen a production that matches the intensity of reading this piece in a quiet and empty room. In fact, I’m still not convinced that 4.48 Psychosis works on stage at all. There’s something about this lonely and jittery dance through the black spaces of a depressive’s soul that demands privacy; put this delicate and wrought piece of theatre on stage and it risks shattering into a thousand ashen pieces.

I’ll tell you what, having seeing this new operatic take on 4.48 Psychosis – written by Philip Venables (the ROH’s and Guildhall’s composer-in-residence) and with the libretto lifted directly from the text – I’m more convinced than ever that Kane’s play doesn’t belong on stage. Or, if it does, we still haven’t found a way to do it justice. How to stage a piece that comes from somewhere buried so deep in a playwright’s soul? It’s a hell of a dilemma but layering operatic voices and an orchestral accompaniment over the top isn’t – really isn’t – the answer. This is actually a pretty brave and striking composition from Venables - full of weird colours and clangs – but it isn’t Kane’s voice. This isn’t 4.48 Psychosis. All the simplicity and fragility of Kane’s text has been trampled over and we’ve been left with – nothing.

By the end of this brawny production I didn’t want to look at the stage, listen to the music or even read the text, which is insistently projected up against the white box set throughout. I longed to be elsewhere. Most disturbingly of all, I became embarrassed by Kane’s text and profoundly uncertain of its worth. Blasted up against the set like that – stretched out by the singers and hammered out by the CHROMA ensemble musicians – Kane’s words began to look crass. They lost their delicate magic. I started to loathe Kane’s writing; they no longer seemed to speak to me.

On reflection, I’m pretty convinced that opera and 4.48 Psychosis are a match made in hell. Had Venables written a wildly discordant, frankly horrific piece of music then this might’ve become something weird and ugly and convincing. As it is, though, the music – as spicily textured and dynamic as it is – feels too definitive and too complete for Kane’s writing. Look at the text of Psychosis and it reads like a poem; there are endless spaces and the words dance about skittishly on the page. There are none of these gaps in Venables’ composition – except for some annoying and random bursts of white noise. There’s not enough mystery. It all makes much too much sense.

There are a few wild and off-beat moments that work brilliantly; a hint at what might have been. There’s an orchestral dialogue between a drum and range of improvised instruments, including a miked up saw, which is threaded into the score. These ‘conversations’ are easily the most expressive moments of the night. The whacky instruments ping, clatter or boom: ‘Why are you unhappy?’, asks the twanging pole. The sullen percussionist hammers out a response, as a tumbling beat – the luring motor of depression – rumbles underneath. These exchanges tremble with the absurdity that a depressive mind-set brings about and the insistent rhythm it sets up in your soul – but they also suggest the way that depression can set the mind free.

These innovations among the orchestral ensemble really sing – but the singing, well, doesn’t. If you look at Kane’s text, it’s packed with short and clipped sentences. This is not a text that asks to be lingered over, but god do these singers wade about in Kane’s words. ‘Diiiiiiie’ stretches on for a good three syllables and becomes another, much sillier word. All those clipped phrases – ‘I am fat, I cannot write, I cannot love’ – are laboured over until they turn away from themselves completely.

The emotional textures are seriously off. 4.48 Psychosis is not – to point out the bleeding obvious - emotionally clear cut. Despite all the sadness and rage buried beneath Kane’s words, the text is actually pretty neutral for great chunks of the time. 4.48 Psychosis isn’t an explosion. It is, for the most part, an attempt to hold back. But the emotions in director Ted Huffman’s profoundly naïve production are horribly explicit. Phrases are delivered in jet-black desperation or resolute rage. If only Kane had such clarity of thought – but part of the pain of this play is the confusion and ambiguity that clings to every word. The six female singers, despite the fracturing that their presence is meant to bring about, are way too sure of themselves. They sing with full-stops banged down at the end of every sentence. It’s all horribly blunt and certain – although there is still a gorgeous intensity to Gweneth-Ann Rand’s and Lucy Schaufer’s performances in particular.

Finally there is the staging, which is so lacking in imagination (this is not designer Hannah Clark’s best moment), that there were points I actually gasped at the blandness of it all. Director Ted Huffman takes Kane’s text bizarrely literally: the singers talk about ‘drowning in a state of palsy’ and they actually begin to gasp and drown. At one point Kane observes that ‘the television talks’ and a TV is duly rolled onto stage. The singers spend a lot of time sitting at desks, presumably pretending to visit the doctor. The only visual element of note is Kane’s text, which is continuously projected against the back wall – but even that becomes dull. Every once in a while, the doors open and a light shines onto the stage. It really is quite spectacularly amateurish and looks only to the surface of Kane’s text. In the final scene, all the various suicide ‘aides’ – a noose and pills and what have you – are wheeled on to stage. One of the poor singers climbs up onto a desk and puts the noose around her neck – although god knows where she’ll be swinging from, since there’s absolutely nothing for her to attach herself to. It’s an utterly empty gesture, with not a hint of real threat about it.