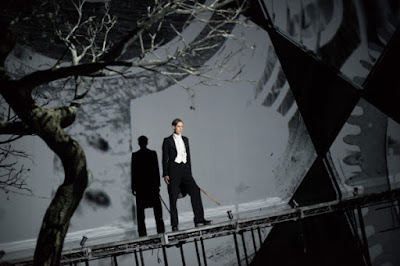 Some of the notes that Ian Bostridge sweeps up to in this stunning re-imagining of Schubert’s Winterreise are so beautiful that they are actually painful to listen to. I watched the whole of Dark Mirror – a fully staged production of Schubert’sWinterreise that has been reframed by Hans Zender’s extraordinary orchestration – in a low level of ecstasy and despair. My heart thumped and my body felt weirdly shivery throughout, as if I might, at any moment, give way to the tumbling emotion of it all and melt away with the snow that blankets Schubert’s desolate journey.
Has there ever been a more profound understanding between a singer and composer than that between Schubert and tenor Ian Bostridge? It is as if Schubert somehow looked into the future, heard Bostridge sing and wroteWinterreise specifically for him. It’s enough to make you believe – or at least want to believe – in a higher purpose. Music this beautiful and a connection this pure between two artists has to, surely, mean something.
Of course, even a mediocre reworking of Winterreise would move the most cynical of audiences. This is one of the purest expressions of heartbreak ever written, with or without Zender’s new framing. The song-journey unfolds in the middle of a freezing winter’s night. A man leaves his lover – who has just spurned him – and trudges through a snow-swept landscape. Along the way he is mocked by weather vanes; his tears freeze and a river runs still; trees, leaves and shafts of light tease him with a hope he cannot feel and cemeteries, shadows and death call out to him.
Schubert’s yearning music (the songs remain largely intact) weaves together with Wilhelm Müller’s crystalline poetry (here given a soft and distilled translation by Simon Scardifield) and phrases such as, ‘My heart still beats warmly’, reach out and freeze you from the inside out. It is the hope inside this piece of music – that bursts free at such desolate moments – that’ll tear your heart in two.
Zender’s orchestration, first performed in 1993, lends Schubert’s songs exciting and unsettling new textures. It is much more challenging than the original piano accompaniment and keeps the audience honest. We are never, not even for a moment, allowed to drift away and find solace in our own imagination. Instead, Zender’s music constantly prods at us and swells in tandem with Schubert’s songs offering warmth and comfort, yet there is always a sad edge to these swells. At other times, Zender’s orchestration works against the songs and becomes an aggressive and alienating presence, which only further isolates Bostridge’s lost and broken singer.
On top of all of this, director Netia Jones (a past collaborator with Bostridge) has layered her poetic black and white projections. Sweeping images of vast white landscapes (shot by Jones in the Arctic) are projected against the Barbican’s huge back wall, alongside abstract shots of trees, gates and frozen rivers. Old and young versions of Bostridge also appear frequently in these projections, sometimes in silhouette form but often in giant close up, his sad eyes scanning the theatre.
The stage design is fairly minimal: a slope runs up the back of the stage, which Bostridge sits, strides, crawls and climbs up. A Beckettian tree stands to the left and the Britten Sinfonia musicians (conducted by Baldur Brönnimann) sit to the right. The musicians are enveloped in a warm glow and, with the wood of the cello and violins shining bright, seem very much a part of the natural landscape. They represent a world that Bostridge can no longer reach. This idea is enhanced by Zender’s use of ‘extended technique’, in which the musicians blow and pluck at their instruments but do not play them. Instead of classical notes we get scrunching, twanging and dripping noises. These odd sounds – music and melody distorted – add to the feeling of depression and warped reality; a promise of normality and happiness that now lies way beyond this lover’s reach.
There are a few moments that feel overdone and over-packed, and slightly take away from the music. In the edgier and more frantic songs, the projections get a little out of control. Spotlights dart across the screen and Bostridge emerges in and out of the shadows; it looks a bit like the opening to a James Bond film and feels a little bit silly. Some of the extreme close ups of Bostridge also risk overwhelming us. Bostridge gives so much of himself in his singing and to layer a giant image of his face on top of such an exposing performance can, sometimes, feel a tad too much.
But there are some moments, and these are often abstract and still, when all the elements in Jones’ thrilling production combine so beautifully that, for just a second, it feels like time itself has frozen. The body turns cold, the heart beats wildly and the brain goes silent. Bostridge sings ‘Mein Herz!’ – my heart, my hurt! – and drops to the floor in agony. The theatre freezes in harmony – but what a tumbling river of pain roars beneath us all.