'Made Visible' review or 'Who do you think you are?'

'Made Visible', Deborah Pearson
The Yard Theatre, 18th March 2016
Written for Time Out 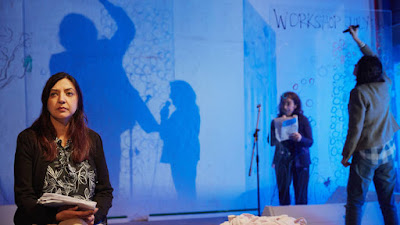 One balmy day in Victoria Park (maybe), writer Deborah (who might be playwright Deborah Pearson) sat next to an Indian woman on a bench and colonised (apologies!) the bench. Sometime later, Deborah reflected on the conversation and wrote a play about white privilege and control of narrative in Britain called ‘Made Visible’. It is a typically thoughtful piece from Pearson, but all those caveats, apologies and meta-theatrical winks take the sting out of this tale.
The play unfolds on Hyemi Shin’s deconstructed park set: benches have the word ‘taken’ scrawled on them, a white hole on the floor reads ‘pond’ and spindly trees have been sketched onto perspex screens. This is where Deborah (an intriguingly unknowable Haley McGee) – who explains that she ‘explores big ideas through an autobiographical lens’ – will chat with Indians Ila and Ayesha, Hindu and Muslim respectively. This is where Deborah will ‘begin a conversation’ about race and racism in Britain – and the luxury of ‘invisibility’ that white people enjoy.
But the conversation never really takes off in Stella Odunlami’s halting production. Only a few scenes wriggle free from all those anxious pauses and wincing asides. At one point Deborah recalls a plane journey, during which a number of Middle Eastern-looking passengers stood up in tandem and Deborah became convinced of an imminent terrorist attack. The audience rumble in awkward appreciation.
In another scene, Ila and Ayesha deliver their ‘off-the-record’ thoughts on the play. Both Mia Soteriou and Anjali Mya Chadha invest their speeches with such burning intent that, for one dangerous second, it feels like these characters are finally speaking for themselves. But the rest of ‘Made Visible’ is so relentlessly inward looking – and so anxious to examine prejudices yet apologise for them at the same time – that we leave thinking only of the playwright’s struggle in writing this earnest but slightly indulgent play.