'Cleansed' review or 'I will love you forever.' 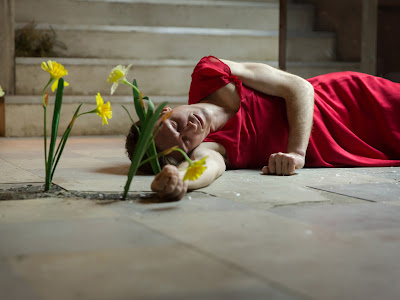 There has been so much talk about the violence in ‘Cleansed’ and, it’s true, there are a lot of shocking moments in Kane’s scorching play: feet and hands are grated off (I feel sick just thinking about it), tongues are cut out and genitals, in general, are given a bloody rough ride. These instances are intense and frightening – but they do not exist in a vacuum and are always, no matter how obscurely, connected with love. We are not watching pain merely for the sake of it but, instead, in the hope of recognising something beautiful beyond. Those tender feelings might be buried deep – behind the stark language, beyond the naked bodies or even beneath the boards of the stage (flowers burst through the floor) – but they are ever-present. The scene I will always remember from ‘Cleansed’ does not involve blood, scalpels or shocks but instead features an entire box of chocolates being slowly forced down a young chap’s throat. I am not straining for novelty when I say that ‘Cleansed’ is one of the most romantic plays I have ever seen – and it just about broke my heart.

Katie Mitchell and designer Alex Eales have located Kane’s play in a strange half-world, as if the institutional setting has been funnelled through countless nights of unsettled sleep. Stark and glowing signs hang from the ceiling; remnants from an ordered life that has long since slipped away. There are fairly normal stairs and doors but a couple of spindly trees poke up through the crumbling floor and strange sparks flash and rumble outside. It is like a play has been crossed with a poem, crossed with a hazy trip, and absolutely everything – including the characters, language and visuals – is stuck somewhere between meaning something concrete and real and falling apart completely.

Michelle Terry is our anchor – if you can have an anchor in such a slippery world – and plays Grace, an anguished-looking lady in a red floaty dress who has come to track down her brother Graham. But Graham is nowhere to be found - although his suited-spirit still lingers - and Grace is gradually drawn into the strange and cruel experiments that spark and flare about her. These experiments are conducted by Tinker (a spookily casual Tom Mothersdale) and his henchmen, who are covered in black from head to toe. Those blacked-over faces are the first of countless images of blindness in a play obsessed with limits; the limits of love, limits of the body (the pain it can endure and the beauty it might hold), the limits of language and – you guessed it – the limits of the theatre.

The experiments revolve around a young homosexual couple: the naïve Rod (George Taylor), who vows to love his boyfriend forever, and Carl (Peter Hobday), who promises to love Rod ‘in this moment, now.’ Rod is made to suffer for his grand statement of love and violence unimaginable is released on him, as Carl looks on. It’s as if Rod is being punished for expressing what, in reality, can never be felt; as if he’s being made to feel, with excruciating clarity, the dishonesty of his statement and the moment that love runs out and blood and skin, guts and muscle take over instead.

All the tension and anguish – and beauty – in ‘Cleansed’ is drawn from the impossible contradictions we live with every day: the conflict between what we say about love and how we experience and express it; but also the complicated relationship between love and violence, life and death. There are lots of sex scenes in here and they are as tender as they are upsetting, as gentle and constructive as they are intrusive and destructive. The body is shown to be the ultimate contradiction; the place where we feel most vital and yet where we ultimately welcome death. In one scene, Rod’s feet are sawn off and, as he lies there with his legs splayed and a blanket splattered with blood, the image looks a lot like childbirth. Kane forces us to confront and accept the co-existence of life and death, beauty and brutality – and the futility of attempting to separate the two.

I am reluctant to bring up Sarah Kane’s depression but there is a naked honesty to all her plays – a refusal to place a protective shield over life or love or loss – that is one of the fundamental aspects of depression. Kane’s plays are an expression of that raw and burning honesty that depression forces on its victims; an expression of a life without comfort, and a life with death always hovering keenly in the wings.

With this honesty comes moments of exquisite tenderness that hit all the harder, given the raw and exposed world in which we find them. The tender moments in ‘Cleansed’ emerge in such unexpected places; they are there in the frozen kiss between Rod and Carl, the tiny flowers that pop up through the stage or a gentle blast of golden sunlight. This tenderness is also expressed through the constant exposure of the actors’ naked bodies: look at those ribs poking through Terry’s chest, those delicate breasts or that spine rippling down a young woman’s back. The willingness of these actors to expose themselves – to refuse to lie with their bodies – adds an extra layer of frailty to this production, which we all feel deeply.

Real frailty and tenderness is also felt in the delicate presence of young Robin (Matthew Tennyson), a vulnerable young boy who quickly falls for Grace. For much of the time, Robin wears Grace’s red dress – a visual reminder of just how much of ourselves we give to those we love. In one scene, Robin turns up with a large box of chocolates for Grace, and is cruelly punished for it. With Robin kneeling at his feet, Tinker forces those chocolates – one by one – down Robin’s throat. We hear Robin gulp and watch him wretch – and yet he somehow manages to stomach every last chocolate. It’s an incredibly moving, hopeless and hopeful image. How silly we are to believe in love – to keep coming back for it, again and again, despite the pain it might cause. How brave and foolish we are; how weak the body is and – yet – how able we are to endure.