'Every One' review or 'Hello from the other side...' 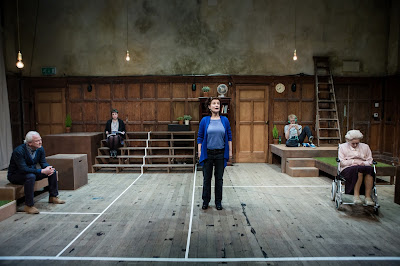 What a gracious and modest show this is – yet how astonishingly powerful too. Jo Clifford’s ‘Every One’ is a twinkling and truthful look at what it is to be human; a tapestry of all the tiny things that make us who we are, help us forge meaningful relationships and make it so hard to let go when our time – softly and suddenly - eventually comes. It is a gentle and personal take on the morality tale ‘Everyman’, directed with instinctive compassion by Chris Goode, which will leave you distraught and lonely, comforted and understood.

Everything about this production is beautifully understated – and all the more powerful for it. The actors barely feel like they are acting and their performances are a whisper away from real life. Designer Naomi Dawson has softly augmented the walls of the BAC’s council chamber so that, whilst the stage looks a little like a family home, it still looks a lot like the original BAC stage. The only thing that feels definitive about this show is the great white streaks that divide the different living spaces on stage – a hint at a bigger, later divide that cannot be ignored. But other than those glaring white lines all the divides and divisions in Every One – the line between acting and reality, insight and insanity, life and death – are soft and transient, waiting to be wiped out with the lightest of sweeps.

Angela Clerkin’s Mary is the every woman of our tale; a middle aged mother, who, when death taps on her shoulder, is forced to confront the meaning of her life and – ultimately – the absolute loneliness of her end. Clerkin’s performance is gorgeously low-key. As Mary introduces her computer-game obsessed son Kevin, fashionista daughter Mazz and twinkly-eyed husband Joe, Clerkin’s performance all-but slips under the radar. She softly explains that she is a tax inspector who, almost in spite of herself, is happy with her lot. She is not, she insists, particularly ‘special’. The dialogue is delivered directly to the audience, the house-lights remain half-up and the actors stay on-stage throughout. As I said, the normal divides and divisions do not apply.

All the ‘big’ moments in this production are achieved with exquisite restraint. When death does come for Mary, she is ironing downstairs, as her daughter (Nicola Weston) sleeps off a hangover and her son, Kevin (Nick Finegan) plays computer games. Kevin describes the sounds his mother makes as she irons and we realise just how much of us is bundled up in those little grunts, sighs and slips we do not consciously control. When death comes it is a horrid little creature on Mary’s shoulder and a spooky rumble that comes from the heart of the audience. It is a softly jolting yet strangely inoffensive moment; a cheeky sideways smile or a kind little squeeze of the shoulder.

Mary’s son travels with her in the ambulance and holds her hand for the first time in years. ‘Every One’ is bursting with moments of longed-for connection – a yearning for skin on skin – that are denied or, for one beautiful or scary moment, finally achieved. Mary and her husband (Michael Fenton Stevens) have sex and communicate in a way impossible elsewhere. Mary visits her mother, who has dementia, and speaks to the ‘place [her mother] sits in’. Mary’s mother turns around and talks to us, able only to reach those who lie beyond the stage. This grandma’s memories occasionally tear through the play and make for some of the most vibrant scenes of the night. Just because we can’t see or touch memory doesn’t make it any less powerful or real.

The most painful moment of failed connection is, of course, once Mary finds herself on the ‘other side’ – that silly euphemism which is revealed with such forceful grace by Clifford and Goode.  As Mary’s family sit clustered to the side of the stage, Mary perches on a chair a few meters away. Mother and family are separated only by the tiniest distance but that small gap is everything. To watch a mother sit so close to her children and not be able to reach out and comfort them tells us all we need to know about death.

That modest scene – and the deep resonances it contains – is typical of a show that affectionately explores and celebrates the small things in life. ‘Every One’ is a play deeply concerned with the tiny details – that ironing sound for example – that make up a person. It is an exploration of the small acts of kindness, such as going to bed early, that we call love. It is also a reflection on the way in which our refusal to respect the small things in life is fucking up our planet on a monumental scale. What, after all, is global warming but a refusal to believe that those tiny creeps in temperature spell the end of our planet?

This alertness to the small details in life – and the profound impact these ‘modest moments’ have on a local and global scale – is deeply embedded in Clifford’s script but is also expressed through Goode’s modest directing style. It takes exceptional humility to pull off a production like this. Clifford is an exceptionally insightful writer yet she refuses to draw attention to her writing. Goode is a powerful director yet hold back throughout, embellishing his production only when absolutely necessary. The performances are so subtle that, by the end, we feel like we know the actors rather than the characters they play. A life well-lived, a play perfectly served, is not – then - a flashy one. It doesn’t need to dazzle and it doesn’t have to shout. Because, let’s face it, when the curtain falls, all those props and pizazz won’t mean a thing. It’ll be just us, empty handed, walking ‘lonely into the darkness’.