'Reasons To Be Happy' review or 'Did you say something about the fairer sex?' 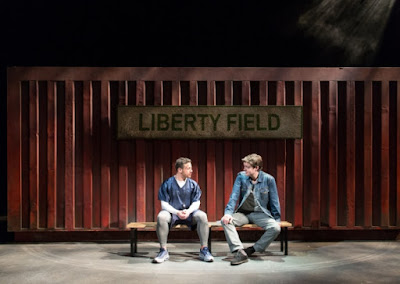 Set in small town America, ‘Reasons To Be Happy’ is the second in a triptych of new plays from Neil Labute; I don’t think I’ll be checking out the third. I can’t imagine where on earth these characters have left to go, since they’re already seriously worn out on this second outing. The female characters, in particular, are so emotionally threadbare that they’re on the verge of falling apart. So, too, was I by the end of this uneven and brittle production.

The same four characters and much of the same creative team from Labute’s first play in this cycle, ‘Reasons To Be Pretty’, have re-assembled second time round. Michael Attenborough returns to direct, Tom Burke once again plays the emotionally illiterate and literature-loving Greg, and Soutra Gilmour has recycled her unwieldly set, which involves a huge container that rotates and unfolds with each new scene. Come the second half, I longed for that container to stay locked up and for the characters to stay safely – and silently – nestled inside.

The play is essentially a game of relationship roulette, with oddly little at stake. Greg bumps into ex-girlfriend Steph (a rather brittle Lauren O’Neil), who has discovered that Greg is now seeing good friend Carly (a slightly subdued Robyn Addison) – who in turn used to be married to Greg’s pal Kent (Warren Brown). This chance encounter prompts everyone to question their life choices and husbands, girlfriends – and even babies – are swiftly cast aside in the pursuit of happiness.

For a play that is supposedly about love, ‘Reasons To Be Happy’ is strangely reckless with its characters’ emotions. Nothing seems to mean very much at all; marriages break down and abortions take place and barely a tear is shed. This rather shallow set up isn’t helped by same strangely lacklustre performances – particularly from a very awkward-looking Warren Brown (here on his professional debut). By the end, Tom Burke is reduced to muttering: ‘I have a shitload of feelings right now.’ Damned if I could tell.