'Bugsy Malone' or 'Splurge guns at the READY!' 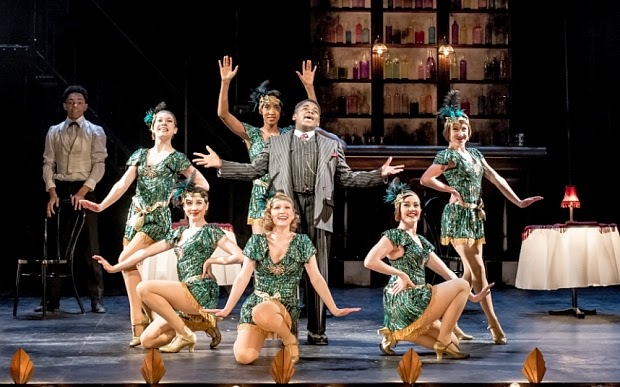 It’s roughly 60 seconds into Sean Holmes’ production of ‘Bugsy Malone’ and I’m hooked. Tallulah is delivering a sugary voiceover, a hoodlum scurries down a spiralling staircase, a blazing spotlight sweeps across the stage and the splurge guns – oh the splurge guns – are fired off for the first time. Admittedly, the splurge guns aren’t quite splurgey enough but, modest splatters aside, Bugsy is a blast. Sparkling, joyful, riotous theatre.

Sean Holmes’ casting is inspired. The bigger the role, the smaller the kid (most of the cast is aged 7 – 13). Bugsy (Sasha Gray) is a trim and nippy little upstart; a charming scamp, but not so slick that it starts to feel creepy. Blousey Brown (Zoe Brough) is a slip of a singer but boy does this lady have LUNGS. The big bad mob moss, Dandy Dan (Oliver Emery), is absolutely tiny and slivers about in huge flashy costumes and coats trimmed with fur. He is the kid equivalent of the cat-stroking villain and an absolute joy to jeer at.

Fat Sam is one of the few exceptions to our diminutive divas. Jenson Steele is bang-out brilliant as the one wise guy, surrounded by knuckle-head hoodlums. He puffs and stamps about the stage, bashing everyone in sight. He’s the kid adult, here to keep these chumps in line. In another clever little twist, Fat Sam’s hoodlums are played by a cluster of older actors. It only makes Sam’s position, as the struggling top dog of 20s Chicago, all the more absurd. Same goes for Tallulah (Asanda Jezile) who’s older than lots of the other singers. It makes her just that little bit sexier but also, a little sadly, out on a limb. And the fact that the boxer, who Bugsy meets later in the show, is so damn huge makes his cowardice just that bit sillier.

Of course, the idea to cast everyone as kids was down to Alan Parker, who wrote the original screenplay. It was a way to get around censorship but it’s also an ironic nod to the screwed up power-dynamics that existed during the American prohibition. In fact, the whole show is essentially one massive wink and a little bit of a ‘fuck you’ to the grown up (and fairly useless) powers-that-be and Sean Holmes’ show is absolutely faithful to that anarchic spirit. The show is two giant fingers raised to the normal status quo in theatreland. The kids are in charge now: deal with it.

Jon Bausor has kept the bulk of the set fairly clear but the framework sparkles. The  ornate Lyric stage is framed by lightbulbs and, above it all, hangs a glowing sign that reads ‘Fat Sam’s Grand Slam’. Other than that, most of the set is lowered down from above. This allows the show to speed along at an impressive pace, as the kids scamper from one scene to the next. There is just one stuttering scene change, when Fat Sam is forced to slowly clear the set. It’s such a cheeky moment, which relishes in the instability of live theatre and reminds us of that lively backstage chaos that is – just about – being kept in check.

There is a roughness about this show that works so well, as if the whole thing – were the kids to really just go for it - might fall apart in a second. The singing is committed and strong and Zoe Brough, in particular, reminds us that are some cracking tunes in Paul Williams’ score. But there are also some pretty shaky numbers, with a few triumphant flat notes, and that feels right too. Even the most tightly choreographed numbers are just a few loose kicks away from total mayhem. Drew McOnie’s choreography – including ‘So You Wanna Be a Boxer’, ‘Bad Guys’ and ‘Down and Outs’- pulses with the kind of manic energy you feel when the kids surge into the playground at morning break. They’re actually incredibly tight numbers but there is a freedom and exuberance about the movement that makes it feel spontaneous and unpredictable.

I wouldn’t have been surprised to find a splurge gun under my seat and for a full blown WAR to break out after the show. That’s how pumped the audience was by the end of this production: we were ready to blast the creamy crap out of each other. If this is the vibe that Sean Holmes wants to create at his swanky and newly re-furbished Lyric theatre, then I am in. I am so bleeding in.