'High Society' review or 'Anyone fancy a Lowball?' 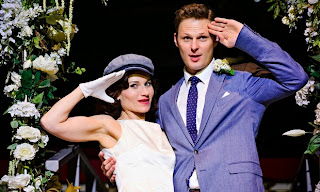 This is certainly an elegant party but (to borrow Cole Porter’s phrase) – swellegant? Nah. There are duelling pianists, swishing petticoats, bright lights and soaring love songs but Maria Friedman’s production of ‘High Society’ never finds its footing. Squeezed into the round formation at The Old Vic, this show feels hampered, creaky and kitsch. It’s a bit like watching a postcard sing.

‘High Society’ is based on a musical film adaptation of a film adaptation of Phillip Barry’s original stage play, ‘Philadelphia Story’. Phew. Arthur Kopit’s book has had a long way to travel and it feels knackered. Cole Porter’s songs are as exuberant (‘Have You Eva’ is a smooth delight) and sparkly as you’d expect – and even contain a few cynical stings (‘Who Wants to Be a Millionaire’ is gleefully droll) – but the book is as flat as anything. There is the memory of a love story buried in here but this is essentially a glamorous musical revue; shiny and silly and fairly forgettable.

Friedman’s production relocates the action from 1930s Philadelphia to 1950s Rhode Island but that doesn’t matter much; context certainly isn’t key (although the whole piece does feel seriously dated). The musical unfolds on the eve of socialite Tracy Lord’s (Kate Fleetwood – compelling as ever) wedding. Tracy is about to marry George, a man so dull that ‘stupidity sits on him like a crown’ (one of the few phrases that made me chuckle). But Tracy’s ex husband, the dashing Dexter (Rupert Young on full-on charm mode), is also on hand and you can bet your bottom dollar that, by the end of one champagne fuelled night, Tracy and Dexter will be sailing off into the sunset together.

The actors seem out of sorts, particularly the raggedy ensemble cast. With every scene change, the ensemble – who play the hired help - clear the set, tentatively singing and tapping their toes as they go. They look a tad embarrassed and never fully commit. That’s largely because there is precious little space for them to play with. The stage – small from the start – is consistently shut down by odd staging decisions. Not one but two pianos crowd out the actors and, in one especially strange move, Friedman (along with designer Tom Pye, who never seems sure whether to celebrate or apologise for this space) elects to place a projected swimming pool slap bang in the centre of the action, forcing the actors to gingerly circle the edges of the stage for all eternity. One gets the uneasy impression of a much bigger production waiting in the wings, just dying to storm onto the stage, holler and dazzle – if only this bloody tiny space would allow it.

On top of this, the actors are miked up to the max. They’re just too loud and clangy, especially for such an intimate space. The orchestra is located on two platforms above the stage and never really feel part of the action.  It’s as if the show ran out of space and the musicians – surely a central part of this bleeding musical – have been hastily shoved aside.


Of course the actors try their darndest and – of course – Kate Fleetwood still manages to conjure up some properly moving moments. In one scene, Fleetwood scampers into the audience and watches her true love, Dexter, leave the party. I was sat right next to Fleetwood at this point and, damn, the pain in her eyes was so fierce I nearly yelped. Fleetwood has a deep and thickly textured voice, and her songs really, well, sing. Dexter and Tracy’s big number, ‘True Love’ is a sumptuous moment of romantic reflection – but it doesn’t last long. Poor Fleetwood is forced to drop a model boat in that damn swimming pool. The little boat waddles across the water and Fleetwood’s fleeting grace is lost amongst a flurry of awkward titters.