'Hurling Rubble' review or 'Shall we end with a bang?' 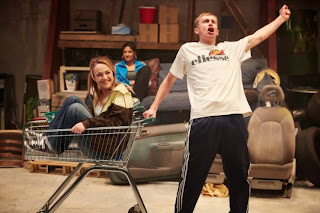 Who and what was behind the 7/7 bombings in London in 2005? This is the central question that rumbles behind Avaes Mohammad's double bill. The first play, Hurling Rubble at the Sun, fleshes out the bomber behind the blown up bus in Tavistock Square. But the second play, Hurling Rubble at the Moon, is a much blunter affair. Sunleft me thoughtful but Moon left me angry for all the wrong reasons.
The two plays unfold on Rhys Jarmans' scarred set. Piles of junk and battered furniture form a crumbling centre piece and flaky walls threaten to tumble. This is the beaten-up world which Muslim 'T' calls home. 'T's father is the local Imam but his mosque is being defaced and the streets no longer feel like his own. 'T' is going to fight back.
Sun hits a few duff notes, particularly in the opening stages. As we watch 'T' assemble a bomb (would be really have constructed it himself?), screaming sound effects slice through the action and 'T' even performs a little rap. Rod Dixon's production feels needlessly flashy; a garishly dramatic version of what is already an exceptionally tense situation.
But the central scene, in which 'T' (Ragevan Vasan) visits his mother (Bharti Patel), saves the play and just about justifies this double bill. The scene blazes with anger and tenderness. In one beautiful moment, 'T' lets his mother feed him his dinner and, for a second, it feels like he's back in the womb. The stage feels safe and pulses with all the warmth and comfort that 'T' has chosen to leave behind.
If only the double bill had ended there - but there is more. Moon focuses on skin-head Skef (Jim English), whose relationships, and racism, connect him back with 'T'. Skeff is very angry but his dad Dean (Mark Cameron) is much, much angrier. The play jolts and judders along, as Skeff's hatred sets alight, he joins the BNP and alienates everyone around him.
Where Sun offers nuance and heart, Moon offers bald exaggerations, dodgy plotting and cold polemic. Jez Bond's production feels wayward, confused and oddly lacking in compassion. At one point, Skeff's dad beats his chest and cries out, "Our fucking England!" He looks like a gorilla and, with writing as crude as this, he might as well be.
It's hard to understand what purpose a play this angry and this dramatically warped might serve. These characters are not the other side of 'T's' story. If only things were that simple - but the conflicts that led to the 7/7 bombings are so much more complicated than this. Moon makes things much too simple and, particularly in a gobsmackingly poorly judged final scene, needlessly shocking. The show screams rather than reflects and shuts down the very dialogue it should be provoking. Deeply disappointing and - in its worst moments - really quite irresponsible.