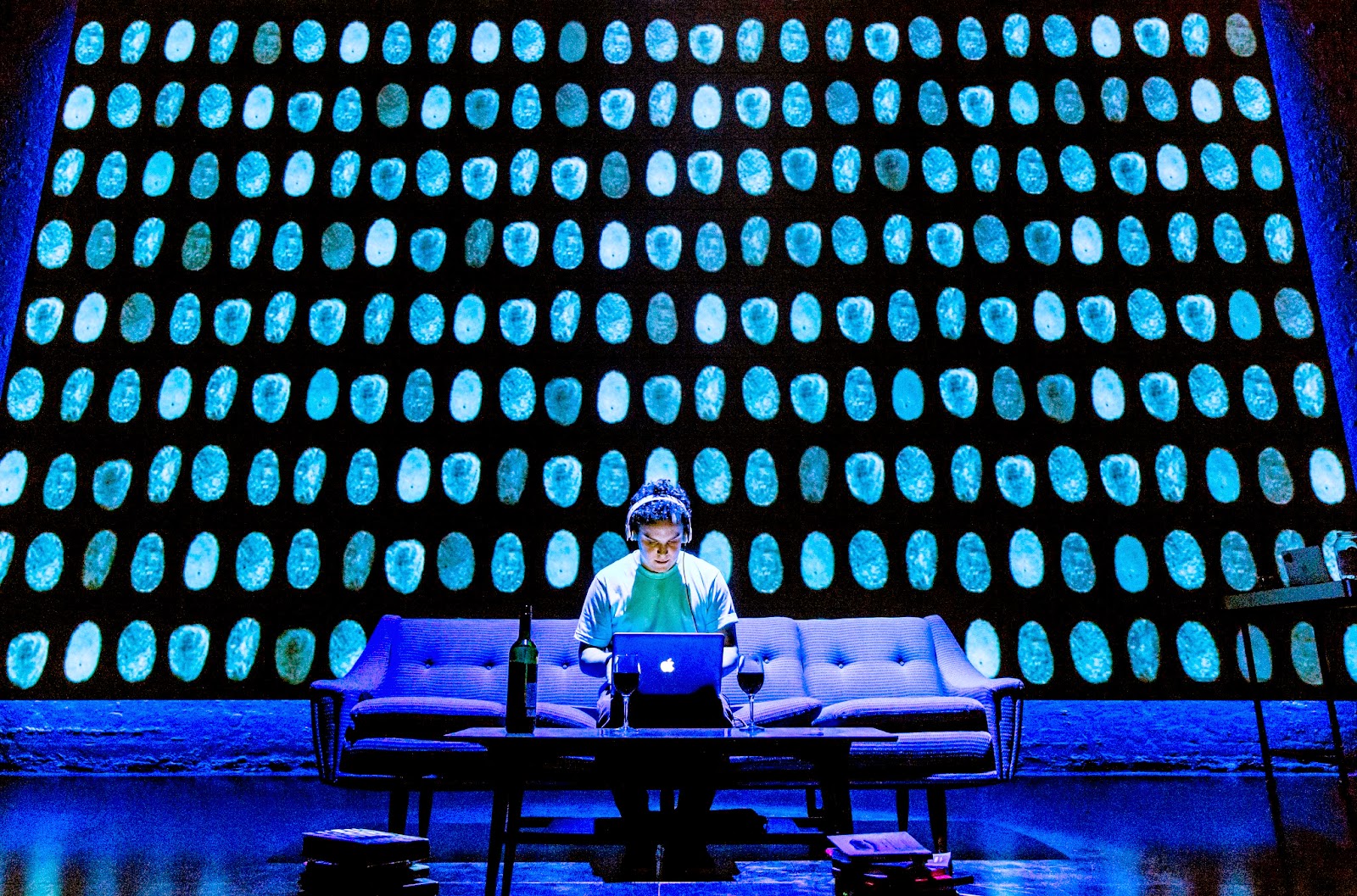 How do we maintain privacy in an internet-led age in which our lives are plastered across social media, our movements are tracked by our mobile phones and the government is spying on us in the name of security? James Graham tackles all these issues and countless more in his bubbling, theatrical party of a play, ‘Privacy’. It’s fun and provocative stuff, even if it does feel a tad pleased with itself.

The show is based on interviews with over fifty public figures, all with strident views on the issue of public security versus personal liberty. Six actors take on countless roles, including politicians William Hague and Paddy Ashdown, Shami Charkrabarti (Director of Liberty) and Guardian Editor Alan Rusbridger. Joshua McGuire plays ‘The Writer’, presumably based on James Graham, and Michelle Terry plays an exaggerated version of the show’s director Josie Rourke.

The interviews are patched together with flair and – fittingly – a great deal of technical wizardry. The back-wall of Lucy Osborne’s striking set is filled with a veritable disco of projections; Google maps, Tinder, Facebook and iTunes are all invited to the party. The director pops up via Google Face Time, one scene merges Spooks and Shakespeare and three of the interviewees sing their statements acapella style. There are also frequent sessions between the writer and his psychoanalyst, as well as a number of interactive elements with the audience members and their mobile phones.

It’s all jolly good fun, as we’re bombarded with facts and figures, images and ideas, speeches and songs. We’re taught how to take Selfies and invited to play around with Google search. In a particularly disturbing segment, those with iPhones are encouraged to explored their Settings a little more closely. We are guided to a deeply hidden ‘Locations’ section in our phone, which records everywhere we have been and the time spent in each location. Frightening stuff.

Graham has clearly done reams of research – but the novelty of this dazzling production begins to wear off. There’s not enough pulling this show together and it starts to feel like we’re watching a huge, animated version of Graham’s notebooks and recordings.

There’s enough juicy stuff in here for a number of excellent and more focused plays. During an interview with a teenage girl, the writer reflects, ‘When I was your age and I got home from school – I was just home.’ There’s a fine play in there about the role that social media now plays in the home and the impact this might have on the idea of family. There’s a whole chunk about Edward Snowden that never takes off and the scenes between the writer and his psychoanalyst bubble with thoughtful and timely concerns.

Perhaps the skittishness of this show is meant to reflect the fickleness of an internet-led age. Perhaps the slightly self-indulgent nature of this piece – which seems a tad more interested in ‘the writer’ than the people he meets - is meant to tap into the ‘me me’ culture that social media engenders. Perhaps. But, whilst it’s all very entertaining, it doesn’t make for brilliant drama.