'Occupied' review or 'Has anyone got any toilet cleaner?' 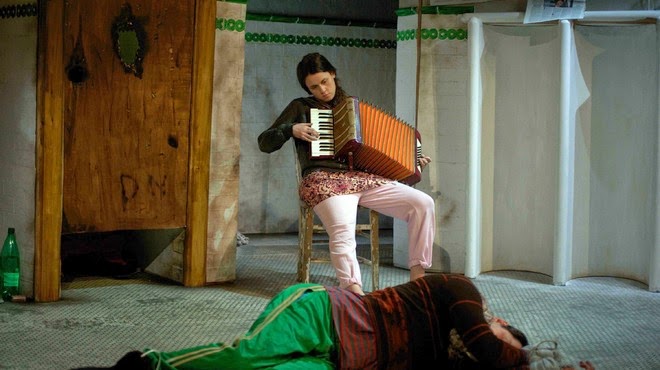 ‘Occupied’ is set in a public toilet in London and, despite the shit stains on set, feels fresh. The premise is simple: two Romanian immigrants kidnap a Brit and demand he teach them the British way of life. Only Tom isn’t playing by the rules – and neither is writer Carla Grauls, who has created an uneven but intriguing and restless show.

Petra Hjortsberg’s design is so grotty that it’s hard to tell where the toilet ends and the room begins. The grimy walls are covered in Daily Mail cuttings, which are used as dialogue prompts. The play’s central question – what does it mean to be British – is repeatedly vocalised. It all feels a bit brittle; the themes over-exposed and the script over-written.

Despite these issues, there’s something captivating about director Anna Mors’ production. The characters are written with commitment and passion. Mark Conway compels as mouthy immigrant, Alex. In lots of ways he’s like a child; he draws fake moustaches on his face and practices karate in his sleep. But Alex’s constant scratching and twitching suggest a violent past he cannot forget.

Josie Dunn’s Andrea is fierce and fragile, although her role is compromised by confused feelings for the prisoner, Tom (Joe Marsh). Their exchanges swing in so many different directions that their relationship gradually becomes a blur.

There’s a manic dynamism to this piece that keeps it motoring. A crazy homeless Romanian woman (Fiz Marcus) wafts – threateningly – throughout the piece. God knows what she’s meant to represent but there’s a fiery melancholy about her that strikes one cold.