'Twelfth Night' review or 'Let's stuff our faces with cake and ale!' 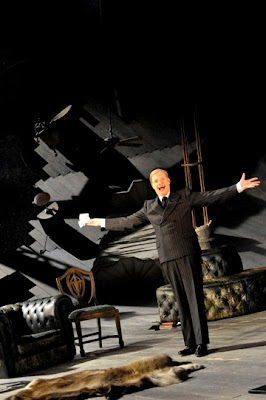 Right from the off, it's obvious this is no run of the mill 'Twelfth Night'. Viola bursts out of a luminous, massive fish tank, sodden and stranded. ''What country friends is this?', she splutters, as a soggy audience squeals with delight. Director David Farr, whose production is part of the RSC's Shipwreck Trilogy, sure knows how to make splash.

'Twelfth Night' is one of Shakespeare's most popular comedies and yet it's often deadly dull. Thankfully, Farr's modern-dress production is not only smart and insightful – it's damn funny, too. Aided by Jon Bausor's witty design, which tilts the stage at bizarre angles, this is a lively and liberated take on a Shakespearean classic.

The comic roles are played with boundless, infectious energy. Sir Toby Belch (Nicholas Day) resembles an ex pat abroad, with his blotchy face and hideous Hawaiian shorts. His partner in crime, Sir Andrew Aguecheek (Bruce Mackinnon) is equally absurd, his hair gelled stiff and his flailing limbs, as limp as his wit. The two make for a bonkers, booming double act.

Yet for all these flat-out entertaining moments, this isn't Shakespearean slapstick. The jester, Feste (Kevin McMonagle) might look like a Royal Variety performer but a sad wisdom glimmers beneath his skits. His songs, composed by Adem Ilhan, are sombre and rather beautiful and lend a subtle texture to Farr's sophisticated production.